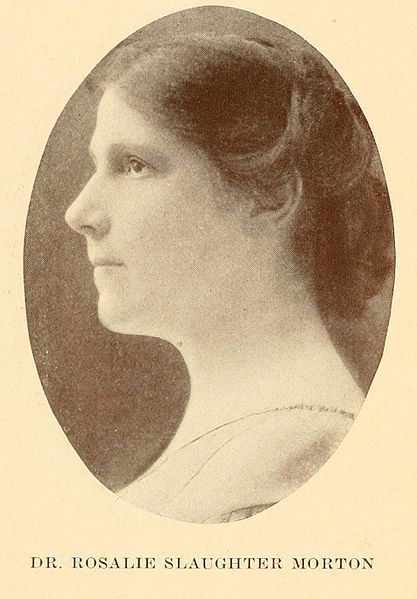 A pioneer in medicine and advocate of gender equality in healthcare, Dr. Rosalie Slaughter Morton was born on November 28, 1872 in Lynchburg, Virginia. Coming from a wealthy family with a long-standing history of only male physicians, as a female initiating the journey to medicine, Dr. Morton faced opposition from her own family. She was expected to follow the norm for well-bred females of her days: marry and raise a family. In her autobiography she writes “My entire upbringing and education had been designed, as it was for all Southern girls, to make me a capable wife—not to imbue me with a desire for a career.” Yet struggling as a minority against the thought that only a man should be a physician, Dr. Morton went against familial and societal expectations and joined Women’s Medical College of Pennsylvania in 1893. Graduating four years later with the top two honors in her graduating class she went on to complete her residency at Alumnae Hospital and Dispensary after which she left the United States to travel around the world practicing medicine.

Dr. Rosalie Morton completed her post doctorate work studying with renowned European physicians in Berlin, Paris, Vienna, and London. She also collaborated with the British Laboratory in India devising treatments against many forms of the bubonic plague. Upon her return to the United States, in 1902 she established a successful gynecological practice in Washington D.C., however upon marriage with attorney George Morton, she went to practice in New York. She was a faculty member at the New York Polyclinic Hospital and Post-Graduate Medical School in the gynecology department. And in 1916 she became the first female faculty member in the surgical department at Columbia University College of Physicians and Surgeons.

During the early 1900s when the First World War broke out in Europe, Dr. Morton went on to treat the wounded soldiers of war. In 1916 the Red Cross appointed her as the Special Commissioner giving her the task of transporting supplies from Paris to the war front. Having spent time in the battlefield in Macedonia learning about field hospital management upon her return to the United States, Dr. Morton began to work on opening an American Women’s Hospital program in Europe. She joined the Medical Women’s National Association: women physicians coalescing together for international health to prevent diseases, which they believed were largely caused due to the destitution that resulted from social and economic injustice existing amongst warring nations. In 1917 Dr. Bertha Van Hoosen, president of the Medical Women’s National Association, appointed Dr. Rosalie Morton chairman of the War Service Committee. Dr. Morton, battling against combined opposition from the US Congress, Red Cross, etc., went on to collect support for the hospital. In 1918 the first American Women’s Hospital was opened.

Dr. Morton believed in the idea that international health is defined as freedom from diseases as a commanding goal of the postwar world. Thus being a woman of action, she was involved in several projects bettering the community: International Serbian Educational Committee, disease prevention project under a civic program of the American Medical Association. She was the first chair of the Public Health Education Committee of the American Medical Association. After World War I ended, her wartime experiences serving as a catalyst, Dr. Rosalie Morton continued her work of helping and educating men and women alike in war-torn European countries such as Yugoslavia and Serbia. In 1968 Dr. Morton passed away after battling a case of pneumonia.