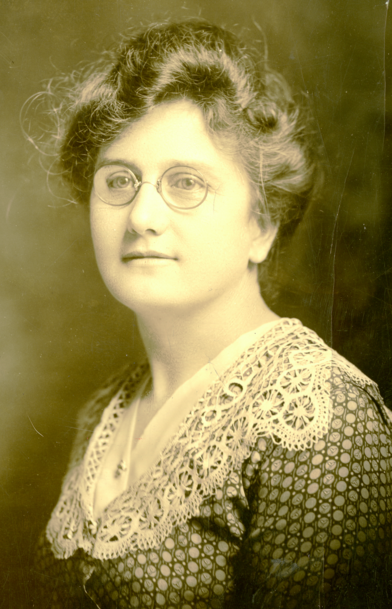 Dr. Olga Stastny, who graduated from the University of Nebraska Medical School in 1913, served with American Women’s Hospitals during World War I.

Stastny was born Olga Sadilek on September 13, 1878 to Teresa and Francis Sadilek. Her parents hailed from Bohemia (now part of Czechslovokia) and settled eventually in Wilber, Nebraska, some 40 miles southwest of Lincoln and a major U.S. destination for Czech immigrants. Stastny was the second of the couple’s eight children, and described herself as “a naughty girl who was not fond of playing with dolls.”

At 17, she married Charles S. Stastny, also a Czech immigrant and a dentist. The couple had two children, and by all accounts were happy, busy and even talked of eventually attending medical school—perhaps togetherii. But 12 years into their marriage, when Charles was only 28, he died from complications of a gallbladder operation and Stastny was left to raise her family alone. Determined to realize the dream she and her husband had conjured up together and influenced by time spent with the local midwife as an adolescentii, Stastny enrolled at the University of Nebraska College of Medicine. She was the only woman in the entire class and 35 years old when she graduated, and flung herself into a career that would in many ways shape medicine for women thereafter.

Her internship was in obstetrics at the New England Hospital for Women and Children in Boston, after which she returned home to Nebraska to open her own private practice in 1914ii. While working from there, she became an active member in what was then the Medical Women’s National Association, a project that would later become the American Medical Women’s Association (AMWA) and whose aim was to promote equal opportunity for female physicians—a radical idea at the time. This aim, of course, were couched in the context of a brewing world war.

As an AMWA participant, Stastny also joined American Women’s Hospitals, a relief agency designed by Rosalie Slaughter Morton. Stastny helped organize the Americanization Department of the Nebraska Council of Defense, and lobbied for a commission to go abroad and help in the war efforts. She said: “I want to get to France, even if I have to scrub floors.” In 1919 Stastny was sent to work in Seine-et-Marne, near Paris. There, American medical women had set up a hospital and Stastny served mainly as an anesthesiologist. In recognition of her work she was ultimately made a citizen of the village and awarded the Medaille de Reconnaissance by the French government.

After serving in this role, Stastny accepted an offer to serve as chair of Department of Hygiene and Social Service in Prague, back to her Czech roots. Here, she helped design a welfare system for children, the beginnings of a nurses’ training program, and a campaign against tuberculosis. She went on to chair the YMCA in Prague, working to implement health prevention programs throughout Czechslovokia; however, this effort was cut short when her only son, Robert, was killed in a plane crash. Grieving, Stastny returned to the U.S.

Her work, however, was far from over; following a period of quiet recovery, Stastny went on to travel both across the U.S. and worldwide, serving as medical director in Loutraki, Greece during a mass exodus of Christian Turks to the area in the aftermath of WWI. This work earned her The Cross of St. George from the Grecian government. Upon return to the U.S., she continued her work with AMWA and was elected to be a delegate at its international conference in London in 1925. That same year Stastny became faculty at the University of Nebraska School of Medicine. After a long, full career, she retired in 1943 although still maintained a very active role in volunteer work. Olga Stastny died in 1952, at 74 years old.

Stastny is remembered not only for her pivotal work as a female physician in WWI, but also her zest for travel and willingness to go anywhere in the world to serve others’ medical and humanitarian needs.