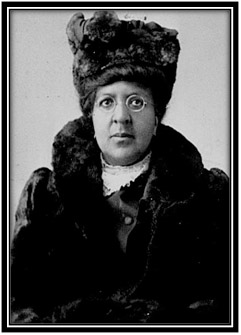 Woman’s Medical College of the New York Infirmary for Women and Children, Graduated 1891

Dr. Harriett Alleyne Rice, was born in Newport, Rhode Island in 1866. Always an exceptional student, she attended Wellesley College in 1883 and became the first African American to graduate from the institution. In her senior year, Rice experienced a fall, but this did not set her back and she graduated from Wellesley in 1887. In September 1888, she enrolled at the University of Michigan medical school, yet her partial recovery from the fall caused her to drop out after her first year. She received two operations. In September 1890, Rice enrolled in the medical program at the Women’s Medical College of the New York Infirmary for Women and Children. She earned her M.D. in 1891 and interned at the New England Hospital for Women and Children in Boston.

By 1896 there were 115 African American women doctors, and Dr. Rice was amongst the second generation of African American women doctors and second generation of women doctors. Rice continued internship at the women’s hospital in Philadelphia and later, at age 27, joined Jane Addams and Ellen Gates Starr at Hull House Chicago, providing medical treatment for poor families. Despite racism against black physicians and discrimination against women physicians, Rice continued to care for her patients. She worked at the medical dispensary and clinic in Hull House providing care for the working poor. Only 1.3% of the population in Chicago in 1890 was black, and the unbearable discrimination forced Dr. Rice to pursue other outlets.

After spending 8 years in college, medical schools, and postgraduate internships and training, Dr. Rice finally opened her own private medical practice. In 1896, Rice produced her first publication “Tabulation of Records of Cook County Institutions with Notes” in conjunction with the Illinois Board of Charities. A year later, Dr. Rice became the only doctor at the Chicago Maternity Hospital and Training School for Nursery Maids. In 1899 she became seriously ill once again and returned to Newport for surgery. She returned in 1901 hopping from the charity office to the Hull-House cashier. Dr. Rice took a broad range of jobs from assistant in pathology laboratory at the Boston Dispensary to the chapter of the Society of the Companions of the Holy Cross Episcopal sisterhood.

When WWI broke out, Dr. Rice was there on the frontlines. At 49 years of age, Dr. Rice practiced as a medical intern at a hospital in Poitiers, France. She cared for the wounded soldiers for three and a half years, staying well after the war ended to make sure every soldier received the proper treatment. In gratitude for her ceaseless efforts during WWI between 1915 and 1918, the French embassy awarded her the bronze medal of Reconnaissance Française for her “immense services” and for “her devotion and ability in caring for the French wounded”. In 1933, Rice worked at a laboratory at Columbia University Medical Center in New York City. Although her medical career may not have been all she expected it to be, her unparalleled dedication and bravery in her works is a testimony for all medical women facing prejudice. Dr. Rice died in 1958 in Worcester, Massachusetts at age 92 and was buried in an Episcopal service in Newport. She is remembered as “a woman of valor.”