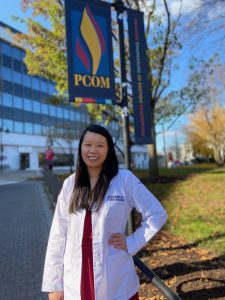 Julia Burns, MS (she/her/hers) is a third year-medical student at the Philadelphia College of Osteopathic Medicine (PCOM). She received her Bachelor of Science degree in Biology, with a minor in Sociology from Muhlenberg College. While pursuing her Master of Biomedical Sciences at PCOM, she spent her time bringing her spirit of advocacy and community to the AMWA PCOM Branch as Branch President. Over her two year term as Branch President, she invested in this community, supporting her fellow leaders in initiative and programming, ranging from a Virtual Networking Series, Journal Club, and Girl Talk, which is a program looking to support the growth of black young women in topics of women’s health, body autonomy, and female empowerment. She was awarded the PCOM 2020 President’s Leadership in Diversity Award for this work and her other efforts in cultural competency and humility. After her term as Branch President, she was elected as Region 3 Director where she supported AMWA Branches in the Mid-Atlantic region. Following her term as Region Director, she was elected as President-Elect, where she looks to further empower women in medicine throughout their medical journey.

In addition to her academic and AMWA pursuits, Julia is also a PCOM DO Ambassador and volunteered through a Medical Student Advocate program, which looks to support and empower patients to address social needs which affect their health, but are not direct medical care. Julia also enjoys baking, whether it’s a quick brownie mix or, her recent accomplishment, cinnamon rolls (which have received raving reviews from fellow stressed out medical students).

Go Back to Student Leadership Page