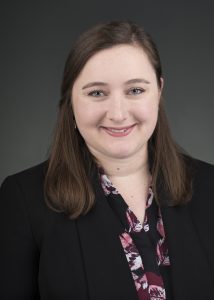 Alyssa Brown grew up in Chattanooga, TN then pursued a degree in Biology and History from Centre College, while playing Division III Golf.  After graduation, she started medical school at University of Louisville School. She fell in love with surgery after seeing her mentor perform an anoplasty during the first year of medical school. She became president of her AMWA chapter at Louisville during the second and third year of medical school, and the chapter raised over $500 for a local women’s shelter. In 2018, she took a break from her MD program to pursue a PhD in Biomedical Engineering and Physiology at Mayo Clinic, before finishing her MD.  During this time, she started working with AMWA at a national level. She and Michelle Benedict began restructuring the AMWA social media. She helped to grow the Instagram from 600 followers to 11.7k. She is now managing a social media and branding team through AMWA, as well as co-chairing the National Liaison Committee. She was an ambassador to the MWIA Centennial Conference. Her PhD research involves the role of neuroinflammation in motor neuron diseases and side projects in pediatric surgery.  When she is not buried in work, you will find her in the pediatric surgery OR, pastries that she saw on “Great British Bake-Off”, or at a concert.