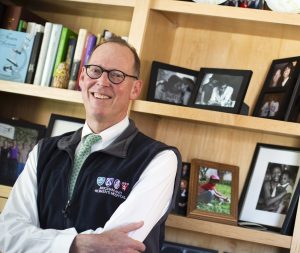 The world has suffered a great loss in the passing of Dr. Paul Farmer, Co-founder and Chief Strategist of Partners in Health (PIH) and Chair of the Department of Global Health and Social Medicine at Harvard Medical School — and a friend to so many of us.

There are not enough accolades to describe the life of a man who dedicated himself so completely to solving the world’s greatest problems of poverty, inequality, and global health disparities. Despite a book about his life and work (Tracy Kidder’s Mountains Beyond Mountains), a film (Bending the Arc), his own published works (Pathologies of Power, Partner to the Poor, To Repair the World, Reimagining Global Health, and more), and countless writings, speeches, and awards, it is impossible to fully convey the loss that is being felt around the world.

I first met Dr. Farmer when I was a medical student rotating at Brigham & Women’s Hospital in Boston. He was a resident then, and it was during an on-call dinner in the cafeteria when I learned of his work in Haiti. Months later, he received the prestigious MacArthur “Genius Grant,” and yet he would always remain down-to-earth and approachable to medical students. During my residency at the Brigham, Dr. Farmer was the infectious disease fellow who helped us on tough clinical cases at all hours of the day–and night. Even then, he was the one who called attention to the unaddressed issues impacting a patient’s medical care. During one memorable conversation about house staff occupational exposures, he pointed out to me the greater challenges faced by less visible healthcare workers, whose choice of profession may not have been as intentional as our own.

Dr. Farmer’s insights and the life he led by example were an unconscious influence during my formative years of training and may have helped guide my own career decisions that did not follow traditional metrics for success. I was grateful that both my work and the Brigham alumni community afforded me opportunities to stay in touch with him periodically throughout the years.

Last year, AMWA was deeply honored to have Dr. Farmer deliver one of our Annual Gala Keynotes (view below). It had been just over a year into the pandemic and eight months after the death of George Floyd, a time which he aptly characterized as one of “awakening and loss… a tectonic level of change.” He reminded us of the importance of resisting a “guild mentality, in order to fight for what our patients deserve and what we need to serve them.”

Most importantly, he posed this question, “Where do we go as a healing profession in the midst of all this pain?”

His heartfelt answer would become a guiding message for us: “…leadership, allyship, and looking out for each other are a big part of what we most need right now. We are certainly humans before heroes, but many of those gathering virtually for the AMWA meeting are nonetheless heroes to me, working as you do to make medicine truly humane and inclusive but also clearly on the right side of history’s ledger.”

At only 62 years of age, Dr. Farmer’s work was far from over. And so, it is left to those of us who remain to follow the path that he forged, to carry on his work to fight inequality on behalf of not only our patients but those less visible in all corners of the world. 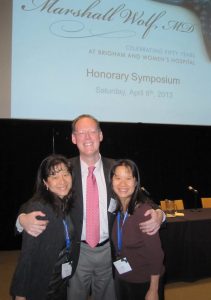