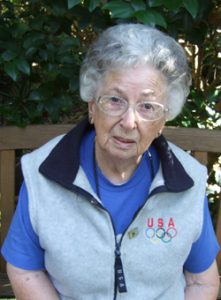 I first met Dr. Barlow in 2005 during the AMWA meeting in Washington DC. She was managing an exhibit table that showcased the American Women’s Hospitals Service (AWHS), AMWA’s charitable program that was founded in 1917. I was a relative newbie to AMWA but had fallen in love with the history of the organization. I was especially intrigued by AWHS because of the back story of how women physicians were not granted commissioned status in the military during WWI, a privilege that was, however, granted to male physicians and nurses. Not willing to back down, AMWA organized the American Women’s Hospitals and sent women physicians overseas to serve, including two all-women hospital units. (View this short film). AWHS continued to provide humanitarian aid even after the war and in different parts of the world through the late 20th century, but then my research seemed to reach an impasse.

You can imagine my joy to find that not only was AWHS alive, but it was continuing to support healthcare needs around the world. Dr. Barlow would continue to attend every AMWA meeting that she could, if for no other reason than to tend the AWHS exhibit or sell handcrafted jewelry from Nepal, notecards, and more to support AWHS. I joined her as co-chair and together with Dr. Laura Helfman, Dr. Dyani Loo and others, we worked with her to grow and expand the program. By 2019, AWHS was on its way to becoming self-sustaining while operating within a small budget footprint. Dr. Barlow sponsored several donor mailings; her passion for AWHS never waned.

The number of women physician leaders at the helm of AWHS have been few and far between–by my count less than a dozen over the past 105 years. The dedication of these leaders is a testament to just how special this program is (see Certain Samaritans). Dr. Barlow was no exception. Were it not for her steadfast leadership during the late 20th to early 21st Century, AWHS would surely have fallen by the wayside. Because of her efforts – and the efforts of others, AWHS celebrated its centenary in 2017. Today, the program remains as vibrant as ever before, this past year raising $40,000+ in response to pandemic needs, PPE shortages, and famine in areas around the world.

Dr. Barlow has been referred to as a Renaissance woman, and indeed she was. While we in AMWA knew her as a physician and former VP at Abbott, she was also a writer, public health volunteer, and accomplished equestrian with a passion for dressage and horse breeding.

Whenever she lost a friend, Dr. Barlow would make a donation to AWHS. Knowing that the success of AWHS was so important to her life’s mission, I plan to carry on her tradition and hope that others might join me.

A reporter once said that the story of AWHS would “go down in history as one of the most remarkable expositions of the devotion of women to the cause in which they have ever played a glorious part—the alleviating of human suffering.” To Dr. Barlow, we owe much thanks for keeping this gem of a program alive in AMWA.

We welcome you to share memories of Dr. Barlow here.

If you would like to make a donation to AWHS in honor of Dr. Barlow, you may do so here.