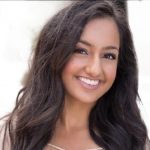 Minka Gill is an undergraduate pre-medical student at the University of Evansville studying Neuroscience and Psychology with a minor in Medical Spanish. She is the president and founder of the local AMWA chapter at her campus and enjoys being involved in an organization that empowers women in medicine. She is also president of the Health Professions Club and works with Habitat for Humanity to build homes for those in need in the community. She enjoys volunteering at a local program called “Rock Steady,” which assists Parkinson’s patients with physical activity. Her other interests include hiking, golfing, and cooking.