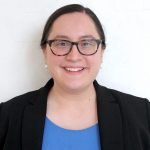 Iris Dupanovic is a premedical student with a BS in Biopsychology and a MS in Biomedical Sciences from Tufts University. She became involved in AMWA as a graduate student, and one of the things that Iris loves most about AMWA is how it connects different women in the medical field, and how much mutual support there is throughout the different divisions.

She is the recipient of AMWA’s 2020 Eliza Lo Chin Unsung Hero award. Iris serves as an Exhibit Coordinator for the AMWA Women Physicians in World War I Traveling Exhibit. She spearheaded the outreach for AMWA’s WWI Traveling Exhibit and, through this position, has continued to shine a light on women physicians who were courageous enough to advocate for their rights and organize hospitals and units to serve their country, even though they were initially told that they were not needed. Iris also served as the 2019-2020 Premedical Region 1 Director, successfully organizing programming for premedical students and expanding the number of chapters in the region.

Besides being involved with AMWA, Iris works as a medical scribe, volunteers as a medical advocate, and tutors for adult who are working hard to receive their high school degree. In her spare time, she likes to bake and take spin classes.