AMWA’s Support of France in WWI

This event is particularly symbolic to AMWA, founded in 1915, given our historical efforts to support France during WWI. At the time, women physicians responded to the U.S. Army’s call for the expansion of the Medical Reserve Corps. Much to their surprise, the services of these women physicians were declined. Nurses, however, were able to serve in the Army Nurse Corps.

Being excluded from military service became a rallying cry for the women physicians of AMWA. Petitions to Washington were to no avail, as Dr. Esther Pohl Lovejoy chronicled in her book, Certain Samaritans, “The women of the medical profession were not called to the colors, but they decided to go anyway.”

Dr. Alice Barlow Brown was one such physician who served through the AWH. In a letter from Nancy, France, she describes the experience, “Oh yes, when we go to this town, we wear gas masks, all ready to apply if occasion demands. The faces of these poor people have changed in expression since our visits. They say not only has America come to their aid in the war, but she has sent her women to help the civilian population…”

Another physician, Dr. Ogla Statsny told a reporter, “I want to get to France, even if I have to scrub floors!” She would join AWH Unit #1 in France in 1919 to aid in the reconstruction efforts.

Ultimately, the U.S. government permitted women physicians to serve as contract surgeons, but without rank or commission. Full commissioned status would not come until WW2, when the Sparkman-Johnson Act was signed into law. AMWA, under the leadership of Dr. Emily Dunning Barringer, was one of the key groups behind that effort.

In 2017, in commemoration of the 100th Anniversary of the U.S. entrance into WWI, AMWA produced an on-line exhibition and short film, At Home and Over There: Women Physicians in WWI, (with Raw Science Foundation) to document the contributions of women physicians in the war effort. After a prescreening at the WWI Museum in Kansas, the film held its U.S. Premiere at the French Embassy in Washington, D.C. It was screened with another film, The American in Paris: The True Story of the American Hospital of Paris in WWI. The French Premiere of the film was held in 2018 at the American Library of Paris.

The work of AWH continued after the war, moving to Eastern Europe to provide aid during other crises, including the Greek genocide, and to other countries, including a return to the U.S. to provide care in rural America during the Great Depression.

The AWHS as it was renamed American Women’s Hospitals Service, continues today, just as it did in 1917, providing grants to clinics and hospitals in remote areas of the world and travel grants to support medical student and resident travel to those regions, as well as community grants for projects in the United States. Whenever the need arises due to earthquakes, flooding, hurricanes, famine, war, or COVID-19, AWHS is always at the  ready to respond. Efforts in recent years have been directed at India, Nepal, Uganda, Afghanistan, in addition to efforts in the U.S.

Today, we remember that the work of AWHS began in France. “In light of our own historical ties to France through the American Women’s Hospitals Service, AMWA is especially honored to welcome His Excellency President Macron and his wife to the White House. Their presence is a reminder of the importance of our relationship with international colleagues and the importance of global health in our work,” says AMWA President, Dr. Theresa Rohr-Kirchgraber.

Learn more how to support the work of the American Women’s Hospitals Service here. 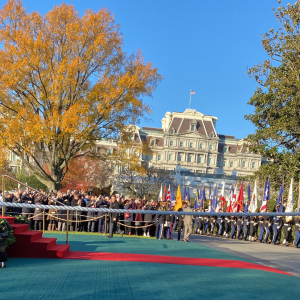 A crowd outside the White House awaits His Excellency Emmanuel Macron, President of the French Republic, and Mrs. Brigitte Macron 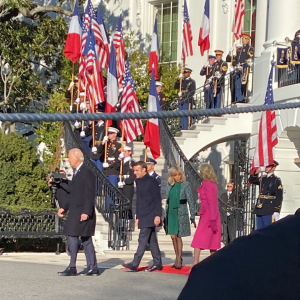