This leadership reflects the growing numbers of women entering the medical field.

Consider the progress over the past century. 100 years ago, women medical students faced significant barriers, given the fall-out from the Flexner Report and the closure of many women’s medical colleges and the fact that many co-educational schools, even if they did admit women, often had a quota that limited the number of women accepted. These numbers remained low until the 1970’s when numbers began to increase after the passage of Title IX, the Higher Education Act, which prevented discrimination on the basis of gender.

Join us for Women in Medical Student Leadership: A President’s Day Panel and hear firsthand from this talented group of women in a session moderated by Rachel Villanueva, MD, President of the National Medical Association. 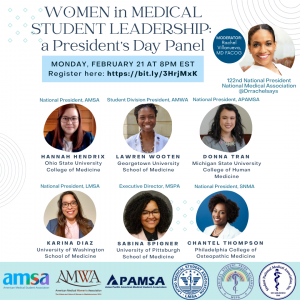