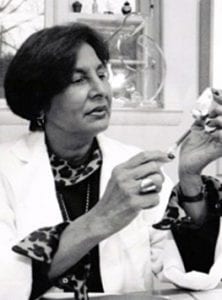 On March 22, Dr. Satty Gill Keswani was honored at the Physician Service Awards for a distinguished career of more than 40 years at Saint Barnabas Medical Center. She is proud to have been part of the Saint Barnabas OBGYN staff and to have practiced her specialty in Reproductive Medicine.

Originally intending a career in surgery, Dr. Keswani arrived in the United States from New Delhi, India in the late 1950s to find that no surgical residencies were available, and that women were not welcome in the field. Instead, she chose obstetrics and gynecology as a specialty and after delivering more than 1,000 babies, she became intrigued by the problem of women who were unable to conceive.

By 1967, she had found her life’s work and established a practice specializing in treating infertility. In private practice in Livingston, NJ for more than 40 years, Dr. Keswani has successfully treated hundreds of couples for infertility while developing new methods to treat the problem. She has helped pioneer procedures that increase the likelihood of success for artificial insemination and continues to pursue several areas of research in the field of human reproduction. 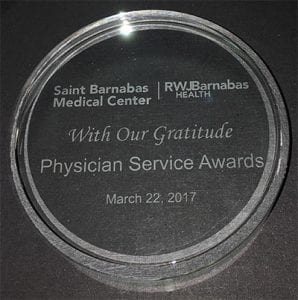 A strong advocate for women in medicine, she has served as a non-governmental organization delegate to the United Nations on population problems and represents the Medical Women’s International Association as well as the American Medical Women’s Association at the UN. She is a past president of the New Jersey Medical Women’s Association and remains active in mentoring women in medicine. Dr. Keswani has continued her work with the United Nations and recently attended the sixty-first session of the Commission on the Status of Women (CSW) as the main representative of MWIA, which addressed the theme ‘Women’s economic empowerment in the changing world of work.’

Dr. Keswani has previously been recognized for distinguished service, including being chosen Woman of the Year in Essex County, New Jersey by the John I. Crecco Foundation in 1986 and later being nominated by Rep. Frank Pallone Jr. (D-NJ-6) as a Local Legend of Medicine, who wrote in praise of her, “aside from her groundbreaking role in women’s health, she is a beloved mentor and role model to her patients and to junior women physicians.”