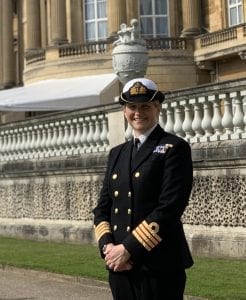 Surgeon Captain Kate Prior is a consultant anaesthetist in the Royal Navy and at King’s College Hospital in London where she does anaesthesia and major trauma. In recent years, her operational military role has taken her to war in Afghanistan and Iraq, Sierra Leone during the Ebola crisis and working for the United Nations in South Sudan. As the Training Programme Director for the South East School of Anaesthesia, she is responsible for the training and pastoral care of over 100 civilian and military trainees, including a large number of women. She encourages all her trainees to aim high and make their professional aspirations a reality and, for the female trainees, she exemplifies what a woman can achieve in the workplace, particularly in the male-dominated world of the military. Kate was the recipient of the Medical Women’s Federation Centenary Award for an Established Doctor.
​
Outside of the hospital walls, she provides pre-hospital care for the military, for the Abu Dhabi Grand Prix and sporting events as diverse as Tough Mudder, the Bramham International Horse Trials and the London Marathon.

Outside of work, she dabbles in triathlon, tries not to get killed cycling to work and indulges in holidays, shoes and handbags.