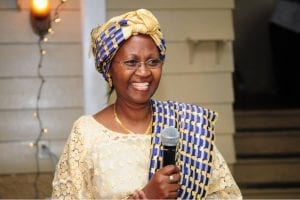 Paediatrician in clinical practice in Nairobi at the Aga Khan University Hospital in Nairobi.

Florence Manguyu was the first MWIA President from the Near East and Africa Region – 1995-1998.

She was a founder member of the Kenya Medical Women’s Association (KMWA), to which she later became the Secretary and Chair of MWIA.

Florence is married to an ophthalmologist. They have four adult children and four grandchildren.