Flying over rivers, forests and highways, Klaus and Manfred wondered what the next few days would bring. Dr Klaus Harbig (Internist) and Dr Manfred Harrmann (General Practitioner), both from Germany, had volunteered to take part in a health camp organised by Clinic Nepal, in Chitwan District – a lowland area of Nepal. This was as much as they knew; everything else was to come as a bit of a surprise. 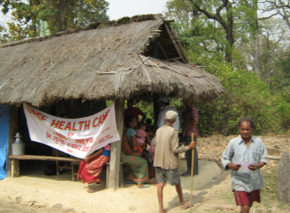 Arriving at Bharatpur Airport – a landing strip on the edge of a small town with the same name – at 3pm on 21st March, the adventure was about to begin. An hour or so outside of Bharatpur the doctors, along with Dr Bishow Bandhu Bagale, from Nepal, and Hari Bhandary, Chairman and Founder of Clinic Nepal came to Chitwan National Park. Chitwan National Park is one of Nepal’s oldest national parks and the one most populated with animals, particularly the one- horned Asian rhino. Would they see any wild animals on their drive through the park?

It was beginning to get dark, the sounds of the jungle could be heard above the engine of the jeep. Wild chickens, wild boars, deer and birds could clearly be seen along the edge of the road, running dustily through the trees. At an army checkpost, designed to keep poachers at bay and protect the unsuspecting public from wild animals, the party were told they could travel no further that night, it was too late. With hours of drive behind them they did not want to turn round soappealed to the army commander who eventually gave permission for them to drive on. By now it was definitely getting dark. And they had been warned the wild elephants were invading a nearby village, enjoying a free meal of ready to harvest wheat in the fields. Was the decision to move on the right one?

Darkness fell but thankfully there was no major incident and the party reached Badarjula village at 9pm. Two full days were spent there treating approximately 430 patients with the rest of the 12 man medical team from Clinic Nepal before moving on to Saraswata Nagar Village, Parsa District. Here, not only did the doctors treat over 240 patients they also distributed goats to various groups, including women’s groups. Overseen by the wife of the school’s principal this distribution took place amidst laughter and fun. In fact, the German doctors were amazed and how patients with even the most serious of complains, were constantly joking and laughing and definitely enjoying the attention of these strange, tall men from a foreign land.Dr Manfred Harrmann attending patients 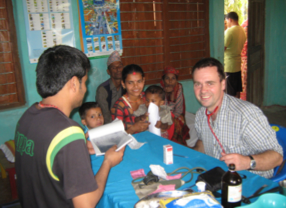 By the 25th March, the team was ready to head to Kanchi Bagai, another long journey through the jungle. Arriving late in the day, the team still managed to see around 175 patients before heading to Ayodhaypuri the next day. Here local volunteers organised by the school principal and a kindergarten tea

cher assisted in directing patients etc. Two heart patients were seen in this village, bringing the total of patients requiring heart valve replacements to three on this trip. Sponsors are currently being looked for to cover the cost of these operations. Two hundred patients were seen here. In Jagarnath Puri, the final stop of the mobile health clinic, the crowd was so large (375) that the team extended their stay by another day.

Overall, the majority of patients seen had joint pain, gastric problems, hypertension and diabetes. More unusual cases included kidney stones and heart problems. Fifteen patients need operations including hernia, tonsillitis and a cyst in the womb and these patients will be taken to Bharatpur Hospital. Payment will be covered by Clinic Nepal with the help of sponsors. With the large number of gynaecological problems witnessed, Clinic Nepal has decided the next health camps will also include a gynaecologist. On a positive note, in the past Clinic Nepal had paid for uterus prolapsed operations, however, this is now being tackled free of charge in government hospitals. This is a common complaint due to the number of pregnancies, short space between births, young childbearing age, and physical work load all women in rural Nepal.

And finally, with 1,422 patients treated over a period of seven days, Dr Klaus Harbig, Dr Manfred Harramann and Hari headed off to Pokhara to enjoy a well-earned couple of days of rest and relaxation!

The American Medical Women's Association is an organization which functions at the local, national, and international level to advance women in medicine and improve women's health. We achieve this by providing and developing leadership, advocacy, education, expertise, mentoring, and strategic alliances.