The American in Paris: The True Story of the American Hospital of Paris in WWI 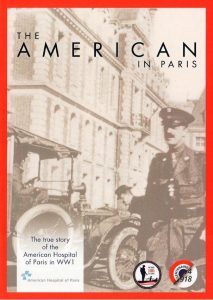 “When World War I broke out on August 4, 1914, U.S. Ambassador to France Myron T. Herrick and the American Hospital’s board of governors offered the hospital’s facilities to the French authorities in order to care for the wounded. The AHP instantly became the epicenter of American volunteer efforts in France, ensuring until 1917 that the tremendous wave of American generosity was utilized to meet the massive needs of war-torn France. Watch “The American in Paris” to relive the American Hospital’s history during World War I and understand its vital role throughout the war leading to its recognition by the French government as an institution of public benefit on March 19, 1918.”- FUSAC

Read more about the film here.