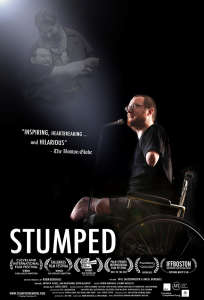 “Will Lautzenheiser was chasing the loves of his life. A year into a promising relationship, he landed a dream job teaching film. Suddenly it was all interrupted by a persistent pain that, unbeknownst to him, was being caused by a deadly infection. When Will’s organs started shutting down, and his limbs began dying, doctors had to amputate both his arms and legs to save his life. Will’s world, as he knew it, would never be the same. As Will tries to accept his new life, news breaks about an experimental surgery that offers him new hope to reclaim his independence.

Putting his life and health on the line, Will risks it all to become the third patient to undergo a double-arm transplantation at the Brigham and Women’s Hospital in Boston. The documentary STUMPED chronicles how he copes with the loss of his filmmaking career by pursuing stand-up comedy; navigates an evolving relationship with his partner Angel, who becomes Will’s lover and caregiver; and gradually transforms, physically and spiritually, with newly transplanted arms. Filmed over four years, STUMPED explores themes of adversity, courage, as well as the life-changing potential of pioneering medicine.”- Good Docs