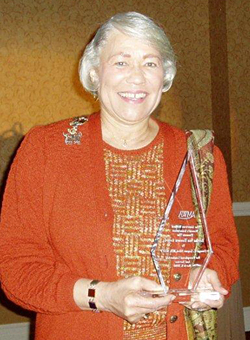 She was born in Washington, DC., on December 14, 1936, to Mary Ruth Dickerson and Louis Jasper Logan, and was the oldest of four children. She was educated in the public schools of the District and graduated from Armstrong Technical High School in June,1954. At Howard University, she became a chemistry major intent on going to medical school. In the Summer of 1958, she traveled to Zurich, Switzerland to study with Dr. Valdo Prelog who later received the Nobel Prize in Chemistry. Omega graduated from Howard in June 1958, Cum laude with honors in chemistry. She began working as a chemist at the National Institutes of Health, Institute of Mental Health. After working at the NIH five years, she was accepted to the College of Medicine at HU and graduated in 1967.

Dr. Silva began her graduate medical education in 1967 with the first group of interns in internal medicine at the Department of Veterans Affairs Medical Center in D.C. She became a Fellow in Endocrinology in 1970, and started a research career in the VA’s laboratory as the first African American woman Research Associate in the Department, advancing to also become the first African American Clinical Investigator doing work on the hormone calcitonin. Dr. Silva and her collaborators were the first to describe the production of calcitonin from small cell carcinoma of the lung in humans in 1974 published in the New England Journal of Medicine. As the Assistant Chief of Endocrinology, she ran the Diabetic Clinic from 1977-1996. She was professor of Oncology at Howard University College of Medicine as well as a Professor Emeritus of Medicine at George Washington University. She retired from the VA in 1996.

Dr. Silva was a member of dozens of local and national committees and organizations. She served on six separate advisory groups for the NIH and was a consultant to the Food and Drug Administration’s Immunology Section from 1981 to 1989. Dr. Silva also served on the board of directors for the Howard University Medical Alumni Association, the National Association of Veterans Affairs Physicians, the American Medical Women’s Association, the Foundation for the History of Women in Medicine and the National Research Center for Women and Families. In 1983, she was elected president of the Howard University Medical Alumni, making her the first woman to hold that post. Dr. Silva was elevated to a Mastership by the American College of Physicians in 2003. She was a diplomat of the American Board of Internal Medicine and the Board of Endocrinology and Metabolism and presented scientific papers internationally and wrote and published extensively, mostly on endocrine topics.

As a member of the AMWA since 1964, Dr. Silva served in many roles, including President of AMWA from 2000 to 2002. Dr. Silva was honored by the National Center for Women and Families in 2010 with the Foremother Award which recognizes lifetime achievements. She was known as a long-standing advocate for universal health care and a committed supporter of the advancement of women in medicine. She was a designer of clothes, hats and furniture and with her husband’s help built a farmhouse Overlook Farm, in Haymarket Virginia, acting as the general contractor. She loved collecting mushroom, horse and giraffe figurines and loved calla lilies.

She is survived by her husband of 37 years, Harold Bryant Webb, whom she married in 1982, her daughter, Frances Cecile Silva Esq., son-in-law Edward Fitzgerald, her brothers Garland Logan and Kenzel Logan, and a host of relatives and friends. A memorial is planned for a future date.