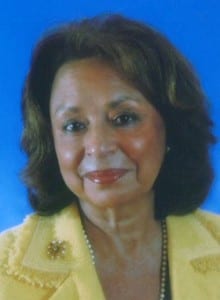 Service with AMWA:  Dr. Pinn has attended numerous AMWA conventions and has been a keynote speaker a number of times, including Keynote Speaker at the AMWA 95th Anniversary Gala (2010).

Quote:  As AMWA approaches its Centennial Anniversary, there is much to celebrate, and yet, many challenges left to overcome for women in medicine and a full contextual understanding about women's health and health care. Together, there is the synergy of each of our individual strengths, and we must endeavor to give of ourselves to improve the paths for successful advancement and enjoyable work/life balance for women who follow us in the marvelous profession of medicine.

Vivian W. Pinn, MD was the first full-time Director of the Office of Research on Women’s Health (ORWH) from 1991-2011 at the National Institutes of Health (NIH) and NIH Associate Director for Research on Women’s Health. Prior to that, she was Professor and Chair of the Department of Pathology at Howard University College of Medicine, Associate Professor of Pathology and Assistant Dean of Student Affairs at Tufts University School of Medicine, and Teaching Fellow at Harvard Medical School.  Through the ORWH, she led NIH efforts to implement and monitor the inclusion of women and minorities in clinical research funded by the NIH.  More recently, she focused on the importance of sex differences research across the spectrum from cellular to translational research and implementation into health care. Dr. Pinn also co-chaired The NIH Working Group on Women in Biomedical Careers.

In 2010, Dr. Pinn completed a national initiative to reexamine priorities for the women’s health research agenda, involving more than 1500 advocates, scientists, policy makers, educators and health care providers — <i><u>Moving into the Future with New Dimensions and Strategies: a Vision for 2020 for Women’s Health Research</u></i>.

Dr. Pinn, a native of Lynchburg, Virginia, earned her B.A. from Wellesley College and her M.D. from the University Of Virginia School Of Medicine in 1967, where she was the only woman and only minority in her class. She completed her postgraduate training in Pathology at the Massachusetts General Hospital.  She is a long-standing member of many professional organizations in which she has held positions of leadership, including being the 2nd woman President of the National Medical Association in 1989.

Dr. Pinn has received numerous honors, awards, and recognitions, including the Athena Award (The Foundation for Gender Specific Medicine), Tufts University School of Medicine Dean’s Medal, Honorary Fellow of the New York Academy of Medicine, The Academy Medal for Distinguished Contributions in Health Policy and Special Recognition Award (Association of American Medical Colleges), and AMWA’s Elizabeth Blackwell Award (1995) and President’s Achievement Citation (1994). She is a fellow of the American Academy of Arts and Sciences and was elected to the Institute of Medicine of the NAS in 1995.  She has received 11 Honorary Degrees of Laws and Science since 1992. The UVA School of Medicine established the “Vivian W. Pinn Distinguished Lecture in Health Disparities,” and named one of its 4 advisory colleges, the “Vivian Pinn College of UVA”. Tufts University established the  “Vivian W. Pinn Office of Student Affairs” and a scholarship fund in her name.