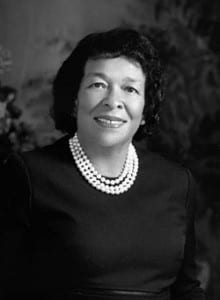 Quote:  Physicians should look at opportunities both within and outside of medicine to contribute to the health of individuals and communities through their volunteer work as well as through private practice.

In 1973, Dr. Epps earned her MPH from Johns Hopkins University. From 1995 -1998, she was a scientific program administrator at the National Cancer Institute of the NIH, where she implemented strategies to distribute smoking prevention and cessation information to health professionals. She was also program officer for several research initiatives on cancer screening and diagnosis.

Dr. Epps authored more than ninety professional articles in peer reviewed publications, including sixteen chapters and books. She co-edited The Women’s Complete Healthbook (selected by the NY Public Library as one of 1995’s most outstanding reference books) and Developing a Child Care Program, a guide for hospital and corporate decision-makers, and wrote health columns in regional and national newspapers.

Dr. Epps was married to her medical school classmate, Charles H. Epps, Jr., MD, for 59 years. Dr. Charles Epps is an orthopedic surgeon, and over the course of his career has served as dean of Howard University’s College of Medicine and special assistant for health affairs to the president of Howard University. Three of their children earned the MD degree, and one holds an MBA. Dr. Epps was a proud grandmother of four grandsons.