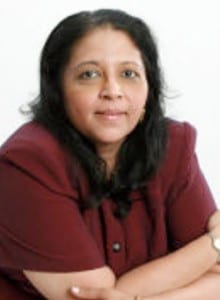 Service with AMWA:  MWIA Co-Representative to the United Nations

Quote:  Women's Health and their Human Rights are Society's Wealth.

Padmini (Mini) Murthy is a physician and an activist who did her residency in Obstetrics and Gynecology. She has practiced medicine in various countries.  She has a Masters in Public Health and a Masters in Management from New York University. She is also a Certified Health Education Specialist. Dr. Murthy has been the recipient of several awards and has presented at numerous national and international conferences. In 2009, she was awarded a Mid-career Achievement Award by the International Health Section of the APHA. Dr. Murthy has experience working in the private sectors in India and in the US. Currently, she is Assistant Professor, Departments of Health Policy and Management and Family and Community Medicine at New York Medical College (NYMC) School of Health Sciences and Practice.  She is also the Global Health Program Director at NYMC. Dr. Murthy is the NGO Co-Representative of the Medical Women International Association (MWIA) to the United Nations. She has served as a consultant to the United Nations. Dr. Murthy serves as Chair of the Women’s Rights Committee of the American Public Health Association (APHA) and member of Governing Council representing International Health Section of the APHA.  Dr. Murthy was elected member of the New York Academy of Medicine in January 2010 and has recently been appointed to the Board of Directors of the Eleanor Roosevelt Center. Dr. Murthy’s book Women’s Global Health and Human Rights has received international acclaim.

In May 2011, Dr. Murthy received The National Council of Women of the United States Distinguished Leadership and Achievement Award, in observance of the 100th Anniversary of International Women’s Day and Progress. In July 2011, Dr. Murthy was appointed member at large of the NGO Commission on the Status of Women (CSW) Executive Committee at the United Nations. That same month, she was named the International Council of Women Representative to the World Health Organization. Her poetry book titled Mini’s Musings was published recently. In October 2011, Murthy was awarded the Sojourner Truth Pin from the National Association of Negro Business and Professional Women’s Clubs, Inc. (the highest honor bestowed by them to a woman who has exemplified outstanding community service and whose life parallels the life and qualities of Sojourner Truth). Her interests including reading, writing poetry and traveling.