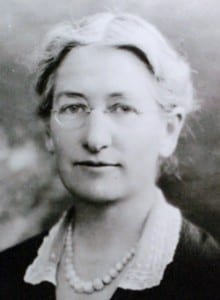 Dr. Martha Tracy, seventh dean of the Woman’s Medical College of Pennsylvania, was one of the outstanding medical women of her generation and a pioneer in medical education.

Her parents, Martha Sherman Green Tracy and Jeremiah Evarts Tracy, were both descendants of Roger Sherman of Connecticut. This New England ancestry endowed Martha with integrity and forthrightness of character that won the respect of all who knew her. Her calm manner, wisdom, and good judgement, plus a keen sense of humor, were her outstanding characteristics.

In 1898, Dr. Tracy graduated from Bryn Mawr College; in 1904, she received her Medical degree from the Woman’s Medical College of Pennsylvania, and in 1917 the degree of Doctor of Public Health from the University of Pennsylvania. As a graduate student at Cornell, Dr. Tracy was known for her work with Dr. Coley, in preparing “Coley’s Fluid,” used in the treatment of sarcoma. She was professor of physiological chemistry and hygiene at the Woman’s Medical College until 1917, when she became acting dean.

Between the years 1918 to 1940, as dean of the Woman’s Medical College of Pennsylvania, Dr. Tracy was active in improving modern medical education. She was a leader of the deans of other medical colleges, and always took an active part in their meetings. In recognition of her accomplishments in scientific and educational fields, she was made a Fellow of the College of Physicians of Philadelphia.  Dr. Tracy was the second woman physician to achieve this honor.

Dr. Tracy found time in her busy life for many extracurricular activities. She spent her summers in her camp in the Adirondacks, and considered camping her hobby. She was active in various women’s clubs, and in 1920-21 was President of the American Medical Women’s Association.

Because of her wide experience in public health and preventive medicine, she was appointed assistant director of health in Philadelphia in 1940. During the World War II years, Dr. Tracy gave her services untiringly in Civilian Defense. It was during this period of stress and overwork that Dr. Tracy contracted pneumonia and died. This ending typified the life of Martha Tracy, never sparing of self and working constantly for a cause to which she was devoted.