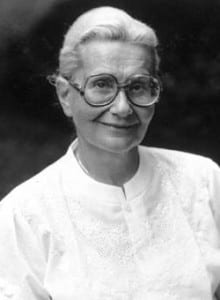 Dr. Wallis was a university student when the German Army invaded and occupied her homeland in 1939. She became a member of the Polish underground resistance, secretly caring for members of the underground and teaching Polish to local children when the Germans closed the schools. The realities of war convinced her of the value of medicine to society.

Dr. Wallis is an authority on osteoporosis, estrogen therapy, and menopause. A dedicated educator, she instituted the “Update Your Medicine” program at Cornell in 1974, one of the first, and now the longest-running CME program in the U.S.

In 1979, she created the Teaching Associates program at Cornell University Medical College which specially trained health professionals to provide instruction and feedback to students as they developed more sensitive and competent breast and pelvic exams and male genitorectal exams. She helped introduce similar programs to other New York City medical schools.

Dr. Wallis has published the Textbook of Women’s Health (1998) for professionals and The Whole Woman: Take Charge of Your Health in Every Phase of Your Life (co-authored with Marian Betancourt, 1999) for the public.  She served on numerous editorial boards (including the Journal of the American Medical Women’s Association, Journal of Women’s Health, Rodale Books on Women’s Health, and the National Academy on Women’s Health Medical Education). She received many awards, appeared nationally on Good Morning America, Today, CNN News, NPR’s Talk of the Nation, and World News with Peter Jennings and has spoken at over one hundred programs before medical and non-medical audiences.

Colleagues describe Lila A. Wallis, M.D., as “the godmother of women’s health.” For half a century she has been a leading advocate for women’s rights to high standards of compassionate care and a partnership role in decisions about their treatment.