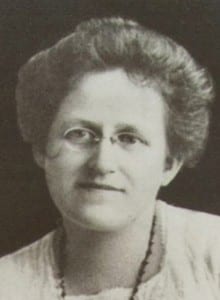 Dr. Lena Sadler was born Lena Kellog in Abscota, Michigan in 1875. She completed a literary education as a young woman, and then decided to pursue work in healthcare. While in nursing school, she met William Sadler, and they married in 1897. Both had active interests in matters of health and they decided to pursue the study of medicine together. They enrolled in the American Medical Missionary College, later called Illinois State University, and graduated with equal honors in 1906. They had one son, William Sadler, Jr., born in 1907.

For twenty years, the two Dr. Sadlers worked as physicians with the Seventh-day Adventist Missions in Chicago and San Francisco, giving medical care to the patrons of the rescue missions. Dr. Lena Sadler also focused on ministering to women detained in Chicago jails. She toured annually on the Redpath Chautauqua Circuit, a traveling lecture circuit to educate community members on a wide variety of topics.  She taught about health, especially women’s and maternal health and hygiene.

The Sadlers were known for beginning a local discussion group in Chicago known as “The Forum,” in which community members gathered to discuss topics of science, religion, history and destiny. Dr. Lena Sadler also pursued post-graduate studies in Paris.

Dr. Lena Sadler was instrumental in many women’s health issues in Illinois during the 1920s. She directed a survey of midwives in Chicago with the Chicago Health Department. As Chairwoman of Child Welfare for both the State of Illinois and the Illinois Federation of Women’s Clubs, she helped forge an alliance among the Illinois State Medical Society, Illinois State Dental Society, the State Department of Public Health and the Illinois Federation of Women’s Clubs – all for the purpose of bringing about more united efforts for health improvement in the state. In her position as State Chairwoman of Public Health and Child Welfare, she advocated for public health across the lifespan.

Dr. Sadler authored various books including a history of medical women in Illinois and a perinatal manual entitled How to the Feed the Baby. She was a contributing author to various publications and leading magazines.