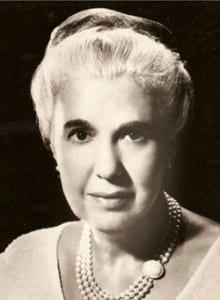 Born in New York City on October 8, 2013 and raised in Lyndhurst, NJ, Dr. Laura Morrow graduated Phi Beta Kappa from New Jersey College for Women – now known as Douglass College (1933), and with honors from the University of Pennsylvania Medical School (1937), one of five women in her class. She did her internship at Lancaster General Hospital in Pennsylvania and her psychiatric residency at St. Elizabeth’s Hospital in Washington, DC, where she met her husband, J. Lloyd Morrow, MD. They were married three weeks later, on Thanksgiving Day 1939, and completed their residencies at Greystone – NJ Psychiatric Hospital, remaining together for 44 years until his death in 1982.

During World War II, she stayed in Lyndhurst while her husband served overseas in the South Pacific. The only physician in town, she delivered babies, performed surgeries, treated illnesses, and volunteered with the Red Cross. She later practiced in Rutherford, Passaic and Clifton, NJ, “retiring” in the early 1990s. She became active with AMWA while living in Passaic and, in addition to the academic aspects of medicine, she was dedicated to helping young women go in to the field and become physicians.

As a psychiatrist, she was able to deftly guide people to self-realization and empowerment so that they were able to fulfill both their personal and work-related responsibilities and feel good about themselves.  She and her husband worked side by side in their home offices and were committed to helping people and keeping families together. They utilized a unique eclectic approach, blending modalities with amazing results. They were pioneers in the use of ECT, EEG’s and psychotropic medication.

Dr. Morrow was a 50-year Distinguished Life Fellow of the American Psychiatric Association, a Fellow of the American Geriatric Society, former director of Psychiatry and senior attending physician at Passaic General Hospital, the first woman president of the Society of Clinical Psychiatrists of Northern NJ, president of the NJ Psychiatric Association (1967-68), Woman of the Year (NJ Medical Women’s Association 1968), Jerseyan of the Week (May 1968), staff physician at Beth Israel and St. Mary’s Hospitals (Passaic, NJ), and a leader in many other local, state and national medical groups.  She was awarded AMWA’s Elizabeth Blackwell Medal (1974), inducted into The Douglass Society at Rutgers (1976), awarded the “Golden Merit Award” from the NJPA and appointed to New Jersey’s first Agent Orange Commission. She was always out there, participating in radio / television appearances and book reviews.

Dr. Morrow served as AMWA President from 1968-1969 and was involved with the creation of the Elizabeth Blackwell commemorative US postal stamp honoring women in medicine.  Her efforts to encourage women to go into medicine were multifaceted and unrelenting. Her daughter, Mary Ellen Morrow, remains active in AMWA, carrying the torch, and utilizing her professional photography skills to document and capture the spirit of AMWA at Annual Meetings. She also leaves behind three sons – Charles (a composer), Kenneth (a CPA), and Robert (a family physician) and 9 grandchildren. All live in the New York metropolitan area.