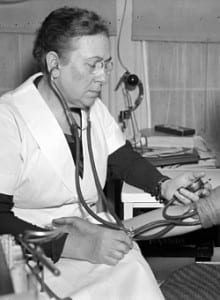 Dr. Kate Karpeles became a physician following in the footsteps of her father. He encouraged her to study medicine and, after completing an undergraduate degree at Goucher College in Baltimore, she chose Johns Hopkins University for medical school, based on its high admission standards and its well-known revised curriculum (following the Flexner report). She earned her medical degree in 1914, but she had a difficult time obtaining an internship, as many programs denied her entrance based on her gender. She later became the first female intern at Garfield Memorial Hospital in Washington, D.C.; however, that hospital was considered of lower quality than someone of her training at Johns Hopkins ought to have been able to attain.

She continued to press forward in her career and became the first woman to be appointed a contract surgeon with the United States Army.  She was given a relative rank of first Lieutenant and was stationed at the emergency dispensary of the War Department in Washington, D.C.  After World War I, she continued a career in surgery, as well as pushing for women’s rights.  She served as president of the American Medical Women’s Association from 1938-39, where her main goal was to increase membership in the organization.  As AMWA president, she also advocated for equal pay and treatment of women physicians in the US Military.

Dr. Karpeles is buried next to her husband Dr. Simon Karpeles in Arlington cemetery due to their service with honor in World War I.