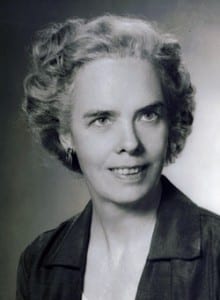 Quote:  Life is like a bicycle - you don't fall off until you stop pedaling...It is better to wear out than to rust out, so keep pedaling.

Janet Travell was born in New York City on December 17, 1901. At an early age she decided to become a doctor. She graduated from Wellesley College (Phi Beta Kappa) in 1922 and the Cornell University Medical College (AOA) in 1926, the top of her medical school class. After her internship at the New York Hospital, she married John W.G. “Jack” Powell, an investment counselor and had two children, Janet and Virginia.

Dr. Travell studied arterial disease at Beth Israel Hospital and was a cardiologist at Sea View Hospital in Staten Island, NY (1936-1945). As an Associate Professor of Clinical Pharmacology at Cornell, she pursued an interest in pain, specifically the relief of muscle pain, an area of medicine pioneered by her father, John Willard Travell, MD.  They practiced together at 9 West 16th Street in New York City.  In 1955, Senator John F. Kennedy of Massachusetts was referred to her for chronic pain in his knee and lower back. The relief that her treatments gave him offered him “new hope for a life free from crutches if not from backache,” wrote his friend and advisor, Ted Sorensen, in his book Kennedy.

In 1961, President Kennedy appointed Dr. Travell to be the White House Physician, the first woman to hold that post. She remained at the White House under President Johnson until 1965, resigning her post in order to return to private life and work on her writing. Her autobiography Office Hours: Day and Night was published in 1968 and her two-volume textbook, Myofascial Pain and Dysfunction: The Trigger Point Manual co-authored with David G. Simons, M.D., was published in 1983 and 1992.  She authored more than 100 scientific papers and has been recognized as one of the leading pioneers in the diagnosis and treatment of myofascial pain, particularly in the concept of referred pain and the discovery of trigger points. In his book, Clair Davies credits Dr. Travell for having “single-handedly created this branch of medicine.” Newly out of print books are available for purchase through her daughters. Read more on Facebook.

After many years on faculty at The George Washington University School of Medicine, Dr. Travell retired as Emeritus and later Honorary Clinical Professor of Medicine.  She continued to lecture and see patients in her office until 1996, when she moved to Northampton, MA with her daughter, Virginia. She died at her home there on August 1, 1997.