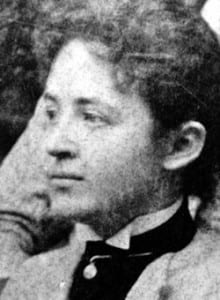 Dr. Kate Campbell Hurd-Mead was a health care pioneer and an advocate for women in the medical profession. She was born in Danville, Quebec, in 1867 and grew up in Newburyport, Massachusetts. She decided to study medicine out of respect for her father and on the advice of the well-respected woman physician, Dr. Mary Putnam Jacobi. In 1885, she entered the Woman’s Medical College of Pennsylvania in Philadelphia, receiving her M.D. in 1888. After internship at Boston’s New England Hospital for Women and Children under the tutelage of Dr. Marie Zakrzewska, she eventually become medical director at the Bryn Mawr School for Girls in Baltimore.

She became increasingly interested in the social role of medicine. A lifelong volunteer in many service organizations, she continued to publish articles advocating a full range of public health services for women and children. After several years in private practice, she spent three years studying gynecology and pediatrics in Vienna, returning in 1907 to be a consulting gynecologist at Middlesex County Hospital.

Dr. Hurd-Mead devoted much of her life’s work to ensuring that medical advances benefited as many people as possible, and to ensuring that the role of women physicians in achieving that goal was well documented and preserved.