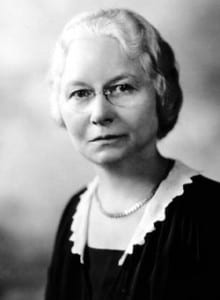 Quote:  I am most proud of the work of the women of the American Women's Hospitals and what they have accomplished. They are doing in a practical way the things that everyone else is discussing – their bit to build and create friendly relations with the peoples who have undergone such frightful suffering.

Dr. Esther Clayson Pohl Lovejoy was born in 1869 and grew up in Portland, Oregon. She admired the woman doctor who delivered her youngest sister, and so she began her studies at the University of Oregon’s Medical School in 1894.  She married a classmate, Emil Pohl, and they lived in Portland where she worked as an obstetrician and her husband, a surgeon.  The couple had a son in 1901, and left him to be cared for by her mom while she worked in Vienna, Austria and campaigned for women’s suffrage at home.  Dr. Pohl returned to Portland in 1904 and was the first woman to direct the Portland Board of Health.  The Board of Health had several advances while she was the lead, including regulating the milk supply, providing funds for school nurses, and securing Portland a national reputation for its high sanitation standards.  In 1908, she lost both her son and her husband to medical tragedies.  She continued to work, despite the deep losses and later would establish the Pohl Memorial Fund at the University of Oregon Medical School, in their memory. In 1912, Dr. Clayson Pohl married Portland businessman, George Lovejoy a marriage that would last for the next 7 years.

Dr. Lovejoy was a staunch supporter of women’s suffrage, the League of Nations, and Prohibition.  She also ran for Congress, though unsuccessfully.  After the start of World War I, Dr. Lovejoy helped establish the American Women’s Hospitals Service (AWHS), a program within AMWA which brought humanitarian relief to areas ravaged by war, famine, and natural disasters.  She directed that program for 47 years.  In appreciation of her service in Greece, she was presented with the keys to the city of Retimo where a street was also named in her honor.

Dr. Lovejoy published 4 books – Women Physicians and Surgeons, Women Doctors of the World, House of a Good Neighbor, and Certain Samaritans, the last of which chronicles the noble work of AWHS in Europe and the Near East.  She lived a long and productive life for 97 years, ever a supporter of women in medicine.