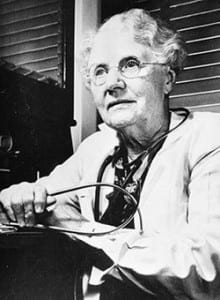 Quote:  Often, when asked why I selected medicine as a career, I have been tempted to reply, "It was a peacock hat and ermine coat that first attracted me to the medical profession."

Born in 1863, Dr. Van Hoosen spent her early years on her parents’ farm in Stony Creek, Michigan. Upon graduating high school in 1880, she enrolled in the University of Michigan where she met two women who had decided to study medicine.  Their enthusiasm inspired her to follow in their footsteps. Despite her parents’ refusal to finance her education, she enrolled in Michigan’s medical department after receiving her bachelor’s degree in 1884. Four years later, she graduated with her doctor of medicine degree.

Upon completion of her residency at the New England Hospital for Women and Children in Boston, Dr. Van Hoosen opened a private clinic in Chicago. At the same time, she accepted a clinical assistantship in gynecology at the Columbia Dispensary in Chicago. As her medical expertise grew, Dr. Van Hoosen’s private practice also flourished, and she found herself in great demand as a teacher. In 1902, though her appointment was opposed by the male faculty, she was made a professor of clinical gynecology at the Illinois University Medical School. In 1913, Dr. Van Hoosen was appointed head of the gynecological staff at the Cook County Hospital, thus becoming one of the first women in the U.S. to receive a civil service appointment. In 1918, she was awarded a prestigious post as head of obstetrics at Loyola University Medical School, making her the first woman to head a medical division at a coeducational university.

Throughout her career, Dr. Van Hoosen devoted herself to the treatment of women and children. She pioneered the use of scopolamine-morphine anesthesia during childbirth, which renders patients unconscious without inhibiting their reflexes. Dr. Van Hoosen delivered thousands of healthy babies and published a book and several articles detailing her research.

An outspoken feminist, Dr. Van Hoosen grew increasingly vocal over the medical establishment’s discriminatory treatment of women. Barred from membership in the Chicago Gynecological and Obstetrical Society, and discouraged by her isolation within the American Medical Association, she called for a meeting of medical women in Chicago. Their meeting led to the formation of American Medical Women’s Association in 1915, with Van Hoosen as the first president.