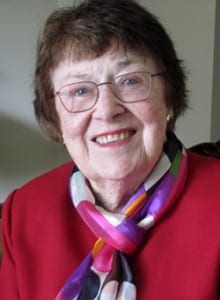 Dr. A. Lois Scully wanted to be a physician since the eighth grade but was discouraged by school counselors who told her that she would encounter strong prejudice.  So instead, she obtained a masters degree in medical technology, worked in a pathology lab, and taught microbiology at the University of Idaho.  She eventually came back to medicine, graduating from Stanford University School of Medicine where she was one of four women in her class.  She does not recall encountering any prejudice then but does remember the support that she received as a woman.  She remained at Stanford for a residency in internal medicine and then completed a fellowship in endocrinology at the Royal Postgraduate Medical School of London.

In 1958, Dr. Scully joined the staff at California Pacific Medical Center (CPMC) as an attending physician.  She became involved with residency teaching programs at the hospital and served on a number of committees.  At the same time, she joined the faculty at the University of California, San Francisco (UCSF), ultimately becoming Clinical Professor of Medicine at UCSF.  She also served on the staff at Children’s Hospital of San Francisco.  She is a fellow of the American College of Physicians.

Dr. Scully became active in AMWA both at the branch and national level, serving first as branch president and then as the national AMWA president from 1978-1979.  In an era when women physicians were a distinct minority, Dr. Scully recalls what it was like to mentor and to be mentored.  She continues today to be an advocate for women in the profession and is pleased to see the growing numbers of women physicians today.

Dr. Scully retired from active practice at the end of 2004.  She remains a lifetime member of AMWA, a member of the CPMC Retired Physicians Committee, and a member of Physicians for a National Health Program (PNHP).  She enjoys reading and volunteers regularly at her church.