“Pay It No Mind” Documentary Screening 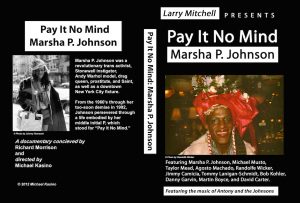 In Honor of Trans-Remembrance Day, on Nov 20th, the LGBTQiA+ committee is holding a viewing of the film “Pay It No Mind” a documentary about the life of Marsha P. Johnson. Marsh P. Johnson was a force of nature. She is considered to be the true initiator of the Stonewall riots and was one of the fundamental community organizers of trans people in Greenwich Village in the 70’s and 80’s. Her tragic death, only many months later considered a homicide by the NYPD, opened the public’s eyes to the abuse and neglect of the trans population.