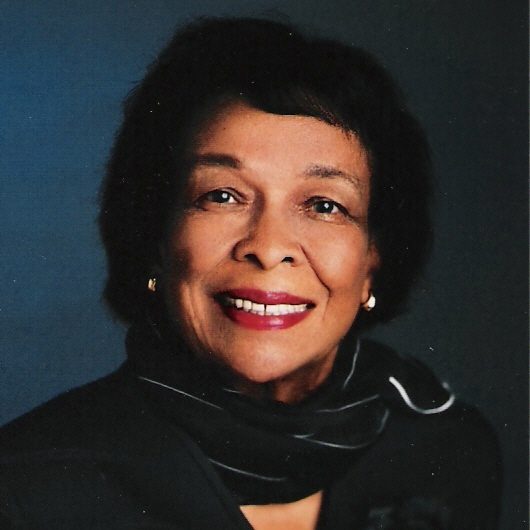 Roselyn Payne Epps, MD attended Howard University, where she received both her B.S. and M.D. degrees, with honors. She completed her internship and pediatric residencies at Freedmen’s Hospital, and was appointed chief resident. Dr. Epps earned the M.P.H. degree from Johns Hopkins University in Baltimore, Maryland and the M.A. in Interdisciplinary Studies from American University in Washington, D.C. She was certified by the American Board of Pediatrics, a member of the American Pediatric Society, Alpha Omega Alpha Medical Honor Society, and Delta Omega Public Health Honor Society. She was a Fellow of the American Academy of Pediatrics.

Her public health career began as a well-baby clinic doctor in the D.C. Health Department. She pioneered new programs and services, and collaborations between government agencies and the community. As an outspoken and effective advocate for the citizens of the District of Columbia and underserved populations, Dr. Epps chaired the task force that developed the Comprehensive Child Care Plan for the District of Columbia. She was appointed the first Acting Commissioner of Public Health for the District of Columbia in 1980. From 1981 to 1984, at the Department of pediatrics and Child Health at Howard University Hospital, Dr. Epps was founding Director of the High Risk Young People’s Project, funded by the Robert Wood Johnson Foundation (RWJF). The programs and services were collaboration between several Howard University Hospital departments, the D.C. Department of Public Health, and The Center for Youth Services. The Project provided community based comprehensive health and social services for high risk youth, ages 15 to 24 years of age. The majority of the patients served at the 15 to 24 Evening Center were male. RWJF Board of Trustees chose the HUH project as an exemplary program. From 1984-89, she was Chief of the Child Development Division and Director of the Child Development Center. She directed several federally funded projects involving child development team assessments and worked with parents and schools. Also at Howard University, she served as the Senior Program Advisor at the Women’s Health Institute, and is Professor Emerita of Pediatrics and Child Health.

As an Expert at the National Institutes of Health from 1989-1998, Dr. Epps conceived of and directed the research-based pediatric program to prevent the onset of smoking by children and youth. She devised strategies to train 100,000 clinicians in smoking cessation techniques nationwide, and delivered the programs in foreign countries. She managed cancer control and helped develop programs for racial and ethnic minorities, and citizens of Appalachia. For 20 years, she served on the Board of Directors of Every Child by Two—the Carter/Bumpers Immunization Campaign.

Dr. Epps authored or co-authored more than 90 peer-reviewed articles, co-edited 17 scientific chapters, and co-edited 14 books and monographs. She was co-editor of The Women’s Complete Healthbook, a 740-page, award winning reference book. The United States Secretary of Health and Human Services appointed Dr. Epps as a member of the Sickle Cell Advisory Committee and the Secretary’s Advisory Committee on the Rights and Responsibilities of Women. She served as chair of the HHS Maternal and Child Health Research Grants Review Committee. Dr. Epps was a medical consultant for the World Bank, The United Nations, NIH, and international private agencies.

Dr. Epps’ more than 60 honors include: The Federal Women’s Award; The Elizabeth Blackwell Award; the NMA Achievement Award; honors from NIH, Howard University, D.C. Government, and Metropolitan Washington Public Health Association. The Council of the District of Columbia declared February 14, 1981, as “Dr. Roselyn Payne Epps Day”. She was featured in Black Enterprise, the Medical Herald, Life magazine, and on Lifetime television. Dr. Epps was inducted into the D.C. Women’s Hall of Fame, and the D.C. Hall of Fame. She was presented the Society for Women’s Health Research’s first Advocacy Award, Howard University’s Distinguished Alumni Award. Dr. Epps is profiled in the Smithsonian Institution’s National Women’s Museum in Dallas, TX, and the National Library of Medicine exhibit, Celebrating America’s Women Physicians. Since 1993, at the annual meeting of the National Medical Association, the Community Medicine Section has sponsored the Roselyn Payne Epps, M.D. Symposium. She was presented the Howard University Dean’s Special Service Award in recognition of her contributions to medical education, the global community and humanity. In 2013, she received the W. Montague Cobb Lifetime Achievement Award from the W. Montague Cobb/NMA Health Institute.

She was married to classmate Charles H. Epps, Jr., M.D. for 59 years. Two of their sons and their daughter earned M.D. degrees, and one son earned the M.B.A. degree. They have two daughters-in-law and four grandsons.