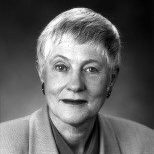 In some medical specialties, the glass ceiling preventing women from rising to the top leadership positions has been especially tough to break through. Surgery has been one of the least welcoming specialties for women physicians. In 1987, Olga Jonasson, MD was named chair of the department of surgery at Ohio State University College of Medicine, becoming the first woman in the United States to head an academic surgery department at a coeducational school of medicine. Dr. Jonasson was a pioneer in the field of clinical transplantation and histocompatibility.

A native of Illinois, Dr. Jonasson attended Northwestern University as an undergraduate and earned her M.D. with honors from the University of Illinois College of Medicine in 1958. She completed graduate medical education in surgery in 1964 at the University of Illinois Research and Education Hospital. She then served her first postgraduate fellowship in immunochemistry at Walter Reed Army Institute of Research and her second fellowship in transplantation immunobiology at the Massachusetts General Hospital of Harvard Medical School.

As a surgical faculty member at the University of Illinois Hospital from 1967 to 1987, she developed one of the first clinical transplantation services in Illinois and set up a statewide histocompatibility-testing laboratory for donor-recipient matching. She was named chief of surgery at Cook County Hospital in 1977, and in 1987 became chair and Robert M. Zollinger Professor of Surgery at Ohio State University. In 1993 Dr. Jonasson returned to Chicago to take a senior position at the American College of Surgeons, where she led educational programs and research in a number of areas of surgical importance.

Dr. Jonasson was a member of the editorial boards of Annals of Surgery and the Journal of the American College of Surgeons and a regular reviewer for the Journal of the American Medical Association and the New England Journal of Medicine. She received a number of honors and awards, was an honorary fellow of England’s Royal College of Surgeons, and was appointed the Markle Scholar in Academic Medicine and the Elizabeth Blackwell Award of the American Medical Women’s Association. Dr. Jonasson was also a member of many surgical societies and served as a member of the board of directors of the American Board of Surgery and the Accreditation Council for Graduate Medical Education. She was widely honored as teacher of medical students and surgery residents and mentored many young surgeons in the development of their careers.