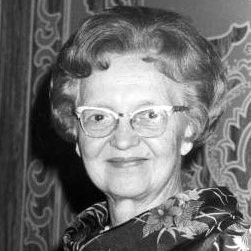 Dr. Vaschak was born August 30, 1910 in Youngstown, Ohio. She attended Western Reserve University, Cleveland (1932) and Women’s Medical College, Philadelphia (1936). She taught at State Teachers College in Albany, NY and was the staff physician for both Pratt Institute in Brooklyn, NY and American Telephone and Telegraph Corp. in New York City before joining the medical services department of E.R. Squibb in New Brunswick, NJ where she was medical director for 10 years. She reminded her son that she became a physician despite not knowing any English on the first day of first grade, having a father that wished her to join the family funeral home business instead of going to university and medical school, and having few women mentors and models preceding her in the profession.

Her husband, L. Robert Oaks, was a strong supporter of AMWA, recipient of AMWA’s Camille Mermod Award for his public relation services to AMWA and was known in the association for the famed Bob Oaks Tours, sightseeing excursions which he organized for attendees at the AMWA annual meetings.