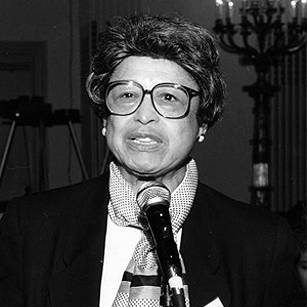 Physician, educator, and writer Jeanne Spurlock, MD drew inspiration in her career from the challenges she faced in life as an African American woman. As a psychiatrist, she made significant contributions in focusing the medical community’s attention on the stresses of poverty, sexism, racism, and discrimination that effect women, minorities, gays, and lesbians. She was particularly concerned with addressing the unique challenges faced by single women, children of absent fathers, and African Americans experiencing what she called “survivor guilt,” —having ambivalent feelings about their own success.

Born in Sandusky, Ohio, Jeanne Spurlock was the first-born in a modest-income family of seven children. After a negative experience in the hospital when she was being treated for a broken leg at age 9, she was convinced of the need for more caring doctors. Believing she was too poor to attend medical school, she decided instead to become a teacher.

After graduating from high school in Detroit, she entered Spelman College in Atlanta on a scholarship in 1940. Though she worked almost full time to meet expenses, she couldn’t afford to continue, and after several years left Spelman and moved to Chicago and enrolled in Roosevelt University. In 1943 she was accepted at Howard University’s College of Medicine in a special accelerated program, and graduated in 1947.

Though few African Americans were entering the psychiatric field at this time, Spurlock completed a residency program in psychiatry at Chicago’s Cook County Hospital in 1950. After a fellowship at the Institute for Juvenile Research in Chicago, she took a position as staff psychiatrist there, with concurrent appointments at the Mental Hygiene Clinic at Women’s and Children’s Hospital in Chicago and the Illinois School for the Deaf. In 1953, she began training at the Chicago Institute for Psychoanalysis, where she remained until 1962, also serving as director of the Children’s Psychosomatic Unit, at the Neuropsychiatric Institute. From 1960 to 1968 she was attending psychiatrist and chief of the Child Psychiatry Clinic at Michael Reese Hospital in Chicago. She also taught as assistant professor of psychiatry at the Illinois College of Medicine, and maintained a private psychiatric practice.

In 1968, Spurlock was appointed chair of the Department of Psychiatry at Meharry Medical College in Nashville. In 1973, she took a position as visiting scientist at the National Institute of Mental Health, Division of Special Mental Health Programs in Bethesda, Maryland. The following year, she became deputy medical director of the American Psychiatric Association, a position she held until 1991. She continued a small private practice during this period, and held clinical professorships at George Washington University and Howard University. Taking advantage of her proximity to Capitol Hill, she often lobbied policymakers to ensure funding for medical and post-medical education, particularly for minorities.

Dr. Spurlock was a prominent member of the American Women’s Medical Association and the Black Psychiatrists of America. She served on the Board of Directors of the Carnegie Corporation, and belonged to the National Urban League, Physicians for Human Rights, and the Delta Adult Literacy Council. She sat on a variety of editorial boards, and was the author of numerous scholarly articles addressing the problems of sexism, racism, and cultural misunderstanding in the mental health field. She co-authored the influential text, Culturally Diverse Children and Adolescents: Assessment, Diagnosis, and Treatment, published in 1994. One of her final projects, Black Psychiatrists and American Psychiatry, published in 1999, described the experience of African-American psychiatrists in academia, research, psychoanalysis, and community psychiatry.

Spurlock won numerous awards throughout her long, diverse, and prolific career. In 1971, she was the first African American and the first woman to receive the Edward A. Strecker M.D. Award from the Institute of the Pennsylvania Hospital for excellence in psychiatric care and treatment. She also received the 1990 Guardian for Children Award from the National Black Child Development Institute.