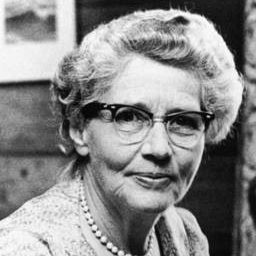 Helen Brooke Taussig, MD is known as the founder of pediatric cardiology for her innovative work on “blue baby” syndrome. In 1944, Taussig, surgeon Alfred Blalock, and surgical technician Vivien Thomas developed an operation to correct the congenital heart defect that causes the syndrome. Since then, their operation has prolonged thousands of lives, and is considered a key step in the development of adult open heart surgery the following decade. Dr. Taussig also helped to avert a thalidomide birth defect crisis in the United States, testifying to the Food and Drug Administration on the terrible effects the drug had caused in Europe.

Helen Taussig was born 1898 in Cambridge, Massachusetts, to Frank W. Taussig, a well-known economist and professor at Harvard University, and Edith Guild, one of the first students at Radcliffe College. Her mother died when she was only 11, and her grandfather, a physician who had a strong interest in biology and zoology, may have influenced her decision to become a doctor.

Despite suffering from dyslexia—a reading impairment—Taussig excelled in higher education. She graduated from the Cambridge School for Girls in 1917 and became a champion tennis player during her two years of study at Radcliffe. She earned a B.A. degree from the University of California at Berkeley in 1921, and after studying at Harvard Medical School and Boston University she transferred to Johns Hopkins University School of Medicine to pursue her interest in cardiac research.

Taussig graduated from Hopkins in 1927, and served as a fellow in cardiology at Johns Hopkins Hospital for the next year, followed by a two-year pediatrics internship. In 1930 she was appointed head of the Children’s Heart Clinic at the Johns Hopkins Hospital pediatric unit, the Harriet Lane Home, where she worked until her retirement in 1963.

By the time Taussig graduated from Hopkins, she had lost her hearing and relied on lip-reading and hearing aids for the rest of her career. Some of her innovations in pediatric cardiology have been attributed to her ability to distinguish the rhythms of normal and damaged hearts by touch, rather than by sound.

Anoxemia or “blue baby” syndrome, the congenital heart condition which Taussig specialized in, is caused by a defect that prevents the heart from receiving enough oxygen. Taussig used fluoroscopy, a new x-ray technique, to establish that babies suffering from anoxemia had a leaking septum (the wall that separates the chambers of the heart), and an underdeveloped artery leading from the heart to the lungs. In 1941 Taussig suggested an idea for an operation that might help children with “blue baby” to her colleagues at Hopkins—surgeon Alfred Blalock and surgical technician Vivien Thomas. On November 9, 1944 Taussig and Blalock first performed this new operation on a child with anoxemia, (after Thomas had experimented extensively with the procedure). They later repeated it successfully on two more patients. They published their results in the Journal of the American Medical Association. The technique was named the Blalock-Taussig operation, and was soon used worldwide. Taussig continued her research on cardiac birth defects and published her important work Congenital Malformations of the Heart, in 1947.

In 1954 Helen Taussig received the prestigious Lasker Award for her work on the blue baby operation, and in 1959 she was awarded a full professorship at Johns Hopkins University, one of the first women in the history of the school to hold that rank. A founder of the subspecialty of pediatric cardiology, Taussig was elected president of the American Heart Association in 1965, and was the first woman recipient of the highest award given by Johns Hopkins University School of Medicine. In 1964 Taussig received the Medal of Freedom from President Lyndon Johnson.