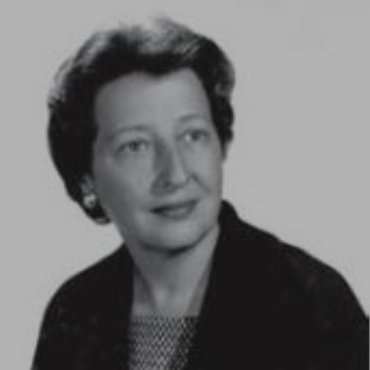 Esther Marting, MD (b.1908) received her medical degree from the University of Cincinnati Medical School in 1932, following in the footsteps of her two older sisters, Dr. Ann and Dr. Miriam. She completed her internship and residency at Cincinnati General Hospital in pathology, going on to study tumor diagnosis and therapy at Michael Reese Hospital in Chicago, Memorial Hospital in New York City, Howard A. Kelley Hospital in Baltimore, Marie Curie Hospital in London, and Curie Institute in Paris.

Dr. Marting turned to private practice in 1946, specializing in tumor diagnosis and radiation therapy. She was a member of many organizations, including the American Medical Association, Ohio State Medical Association, American Board of Radiology, American College of Radiology, Ohio State Radiological Society, and the Cincinnati Academy of Medicine where she was Secretary from 1950 to 1951.

Her leadership in AMWA included serving as Secretary in 1951-1952 and President 1955-1956. She was awarded the Elizabeth Blackwell Medal in 1966 for her outstanding leadership and service to women in medicine.

In her personal life, Dr. Marting was married to Dr. Howard D. Fabing and together they had three children, Susannah, Priscilla, and Howard William. She was an active participant in PTA meetings and was president of the Zonta Club of Cincinnati from 1951 to 1953. Her hobbies including sculpturing and she created portrait busts of various professors at the University of Cincinnati Medical College.