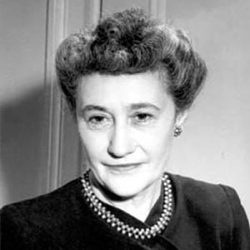 Elise Strang L’Esperance, MD graduated from the Women’s Medical College of the New York Infirmary in 1900. She was one of Dr. Elizabeth Blackwell’s first students. Over the course of her career, Dr. L’Esperance worked initially in pediatrics and later served on the Tuberculosis Research Commission in the Research Laboratories of the New York City Department of Health. In 1910, she began pursuing pathology under the guidance of Professor James Ewing. Within ten years, she became the first woman to achieve assistant professorship at Cornell University Medical College, a position that she held until 1932. Her chief interest centered on malignancies and early detection. In 1932, she and her sister founded the Kate Depew Strang Tumor Clinic, in memory of their mother who died of cancer. Dr. L’Esperance became the director of this highly esteemed facility. The Kate Depew Strang Cancer Prevention Clinic was later founded in 1937 and a similar center at Memorial Hospital in 1940. In recognition of her contributions to preventive medicine, she was appointed assistant professor of preventive medicine at Cornell University Medical College in 1942 and full professor in 1950.

Dr. L’Esperance was the recipient of multiple awards, including AMWA’s Friendship Award for eminent achievement (1946), the Medallion of Honor of the Women’s International Exposition (1947), the Blackwell Centennial Citation from Hobart College (1949), the Blackwell Centennial Citation from the New York Infirmary (1950), and the Albert Lasker Award of the American Public Health Association (1951) in recognition of the “eternal inscription written by her inspired application of preventive medicine to cancer control.” She received honorary degrees from the Women’s Medical College of Pennsylvania (Doctor of Science, 1950) and from Lindenwood College (Doctor of Law, 1951). In 1950, she was elected a fellow of the New York Academy of Sciences. Dr. L’Esperance was also a prolific writer. She was the first editor of the Journal of the American Medical Women’s Association (JAMWA) and became president of AMWA in 1948. Her hobby was breeding and showing horses and she became a notable exhibitor. Dr. L’Esperance passed away at the age of 80 after a long and distinguished career in medicine and a legacy that would forever impact cancer diagnosis and treatment.