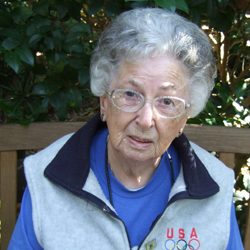 Born in Yorkshire, England of Scottish parents, both doctors, Anne Barlow, MD studied in London during the WWII years. She washed a great many dishes for the British Red Cross, the YMCA and the American Red Cross. She was also an Air Raid Warden for the Paddington District.  After graduation, she went to Toronto as a Rotary Foundation Scholar. She later moved to the United States, and in 1963, she joined Abbott Laboratories as a Medical Writer. Over the next years, while clambering up the corporate ladder (to Vice-President, Medical Affairs for the Hospital Products Division) she undertook a host of activities. She ran the Well Baby Clinics for Lake County, Illinois, served on the High School and Special Education Boards, was President of the Tuberculosis Board, was a village Health Officer, President of the County Board of Health and raised two children.

Moving to Pennsylvania in 1984, she started her own consulting company (closed in 2003). As far as organized medicine is concerned, in Pennsylvania she was a county delegate and served on the Pharmaceutical Committee. In Florida (from 1989) she was Nassau County Delegate and President of that county association. With the AMA, she worked with the Senior Physicians Group and served as the chair of, first, the Advisory Committee and then of the Governing Board as that group developed. She retired from the Senior Physicians Group in 2004 after about fifteen years of service.

Anne worked many years with AMWA, and was President in 1983. From 1984 she was Chair of the American Women’s Hospitals Service Committee, the charitable arm of AMWA. She resigned after fifteen years and was called back in 2004 as Chair again, a position dear to her heart. Now in Florida, she continues to serve the community, first as a Board member and then Board President of Sutton Place the local non-profit behavioral Health entity, and in 2005, she helped the start-up of a free clinic in her town and is on the newly formed Advisory Council. A long-time equestrienne, Anne runs a sport-horse breeding farm with her daughter. They are now campaigning a promising young stallion. (At 86, Anne does not ride the young stallion.)