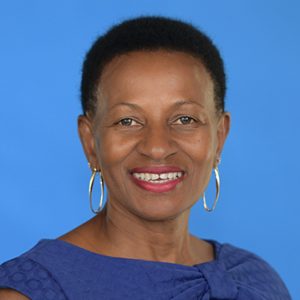 Deborah Deas, M.D., M.P.H. is Vice Chancellor for Health Sciences, the Mark and Pam Rubin Dean of the School of Medicine, and Professor of Psychiatry at the University of California Riverside (UCR). She serves on the Board of the California Institute for Regenerative Medicine. Since joining UCR, she led the opening of UCR Health which includes primary care and multispecialty clinical services, and under her leadership UCR School of Medicine has expanded its clinical affiliations, increased its National Institutes of Health (NIH) funding, and increased student, staff and faculty diversity. Most recently, UCR School of Medicine was awarded one of 13 National Institute on Minority Health and Health Disparities Center grants.

Dr. Deas earned her Bachelor of Science degree in Biology from the College of Charleston in 1978 and her Master of Public Health (MPH) degree from the University of South Carolina in 1979. She earned her M.D. from the Medical University of South Carolina in 1989 where she also completed her residency in adult psychiatry and fellowship training in child and adolescent psychiatry as well as addiction psychiatry. She also completed a National Institute on Alcohol Abuse and Alcoholism (NIAAA) substance abuse research fellowship.

Dr. Deas is board certified in adult psychiatry, child/adolescent psychiatry and addiction psychiatry. She was the Founding Director of the Adolescent Substance Abuse Program at the Medical University of South Carolina. She has been honored with several national awards in the areas of diversity and inclusion as well as in the field of psychiatry.

Her research interests include pharmacotherapy and psychosocial treatments for adolescents and adults with substance use disorders, attention deficit hyperactivity disorders (ADHD) and anxiety disorders. She has received NIH funding (R01) as well as industry funding for her research and published articles in several peer-reviewed journals.