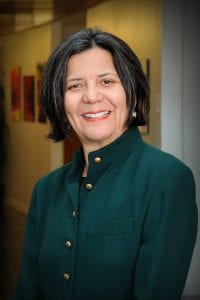 Dr. Sandra R. Hernández became president and CEO of the California Health Care Foundation in January 2014. CHCF is an independent foundation with assets of more than $700 million, headquartered in Oakland, California, and dedicated to making health care work for all Californians, especially low income and underserved populations.

Prior to joining CHCF, Hernández was CEO of The San Francisco Foundation, which she led for 16 years. She previously served as director of public health for the City and County of San Francisco. She also co-chaired San Francisco’s Universal Healthcare Council, which designed Healthy San Francisco, an innovative health access program for the uninsured.

Hernández is an assistant clinical professor at the University of California, San Francisco, School of Medicine. She practiced at the San Francisco General Hospital in the AIDS clinic from 1984 to 2016. She served on the External Advisory Committee at the Stanford Center for Population Health Sciences in 2016. She currently serves on the Betty Irene Moore School of Nursing Advisory Council at UC Davis and the UC Regents Committee on Health Services. She is a graduate of Yale University, the Tufts School of Medicine, and the certificate program for senior executives in state and local government at Harvard University’s John F. Kennedy School of Government.