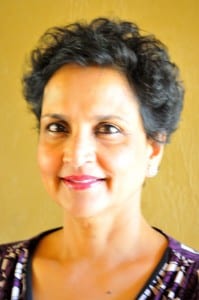 Dr. Shobha Krishnan is the founder and president of the Global Initiative Against HPV and Cervical Cancer. She is a board certified family physician and gynecologist and has been involved in the areas of primary care and women’s health for over 30 years.
Cervical cancer is the only cancer against which we have made tremendous progress: we have HPV vaccines for primary prevention, Pap and other newer screening tests for secondary prevention and early and late treatment for tertiary prevention. Yet, a young woman between the ages of 35 and 60 dies every two minutes from this disease.

In her talk, Dr. Krishnan will discuss the opportunities and challenges her organization faces while fighting this cancer. She will conclude her presentation with a riveting video clip of a young lady called Michele Baldwin who paddle-boarded 700 miles of India’s Ganges River in India with terminal cervical cancer to raise awareness about the disease.

Krishnan will then open the floor for a discussion as to how we as women can come together to wage a global fight against cervical cancer and eradicate it as a major chapter from the book of women’s health.

Dr. Krishnan is a member on the expert’s panel of the American Sexual Health Association, Medical Advisory Board member of the National Cervical Cancer Coalition and serves on the scientific advisory committee of the Akbaraly foundation based in Madagascar. In addition, she has served on the STD research-working group at the Columbia College of Physicians and Surgeons, and as surveillance physician for the Centers for Disease Control and Prevention. She is the author of the national and international award-winning book, The HPV Vaccine Controversy: Sex, Cancer, God and Politics (Praeger 2008)
Krishnan is a diplomate in Obstetrics/Gynecology and Family Medicine. After completing her residency training in Family Medicine at St. Vincent Hospital and Healthcare Center, Indianapolis, she went into private practice for 10 years before joining Columbia University in 1999 where she worked until 2011. In December 2015, she received her Master’s certification in Non Profit Leadership and Management from the University of Florida.