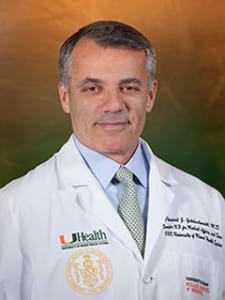 Pascal J. Goldschmidt, M.D., an internationally renowned cardiologist and cardiovascular researcher, is Dean of the University of Miami Leonard M. Miller School of Medicine. He also has served as Senior Vice President for Medical Affairs for the University of Miami and as founding Chief Executive Officer of UHealth – the University of Miami Health System, which includes three hospitals and more than one dozen outpatient facilities in Miami-Dade, Broward, Palm Beach and Collier counties, with more than 1,200 physicians and 9,000 staff. He joined the University of Miami in 2006.
Dr. Goldschmidt, whose research applies genomics and cell therapy to the prevention, diagnosis and treatment of coronary artery disease, was previously chairman of the Department of Medicine at Duke University Medical Center. Before taking the chairman’s role, he served as chief of Duke’s Division of Cardiology. Before joining the Duke faculty in 2000, he was director of cardiology at The Ohio State University College of Medicine and Public Health, where he built the Heart and Lung Research Institute and launched a heart hospital.

In October 2008, Dr. Goldschmidt received the inaugural Jay and Jeanie Schottenstein Prize in Cardiovascular Sciences from the Ohio State University Heart and Vascular Center. The prize, the largest for cardiovascular disease, is awarded biennially to an international leader in the clinical sciences of cardiovascular medicine. Dr. Goldschmidt is also a member of honorary organizations, including the American Society for Clinical Investigation and the Association of American Physicians.