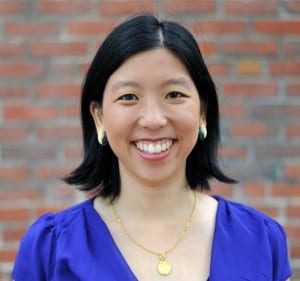 Alice Chen, MD is a practicing internal medicine physician and the Executive Director of Doctors for America – a national organization that mobilizes doctors and medical students in all 50 states to be leaders in putting patients over politics on the pressing issues of the day to improve the health of patients, communities, and nation. She is an Adjunct Assistant Clinical Professor at the David Geffen School of Medicine at UCLA. She received her undergraduate degree from Yale University and her MD from Cornell Medical College. She completed her internal medicine residency at UCLA. During medical school, she volunteered as a caseworker for the American Red Cross and assisted the director of the largest service center in Lower Manhattan for 6 months after 9/11. She was also the co-director of Big Buddies, a program based on the Big Brothers Big Sisters program in which Cornell medical students mentored underserved youth. At UCLA, she served as the co-director of the Resident Elective in Malawi, Africa for the UCLA Department of Medicine and Program in Global Health from 2008-2010. She has been a leader in Doctors for America since its inception in 2009 and served on the board and as vice president before becoming the Executive Director in 2011. She has spoken about physician advocacy and health reform all over the country and in national media outlets. She is originally from the San Francisco Bay Area.