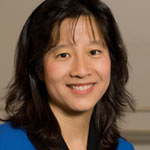 Dr. Eliza Chin is an Assistant Clinical Professor of Medicine at UCSF.  She has been actively involved in AMWA for over a decade, serving as President during AMWA’s 95th Anniversary Year.  She has been an integral part of many of AMWA’s programs, including the founding of AMWA’s Networking Alliance, the launch of Faces of AMWA – an on-line exhibition, and AMWA’s Annual Meetings over the past several years.  She has a particular interest in the history of women in medicine and the stories of women physicians during all stages of their careers.  In 2002, she published the anthology, This Side of Doctoring:  Reflections from Women in Medicine.  In 2003, she was featured in the National Library of Medicine’s Exhibition, Changing the Face of Medicine:  Celebrating America’s Women Physicians.  Working with and collaborating with women physicians leaders is her passion and she is honored to be AMWA’s Executive Director, to serve the organization that has provided her with so much support.

Dr. Chin is a graduate of UC Berkeley, Harvard Medical School, and Columbia University, Mailman School of Public Health. She completed her training in Primary Care at the Brigham and Women’s Hospital in Boston.  She was Assistant Professor of Medicine at Columbia for many years before relocating to California where she continues to teach medical students and practice medicine part-time.  She is a past Visiting Scholar of the Women’s Leadership Institute at Mills College and currently Medical Director of Bayside Park, a long-term care facility.