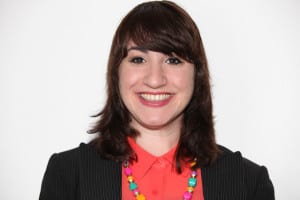 Victoria Greenberg currently serves as the Region 3 Student Director. She served as Co-President for Jefferson’s AMWA student branch during the 2011 – 2012 academic year. She attended college at the University of Maryland, College Park.

I remember attending AMWA’s recruitment event, the s’mores night, and hearing all the girls talk about their passions for medicine, reform, and they all seemed very spirited and truly interested in AMWA. It was very refreshing and I felt comfortable pretty quickly. I then decided to look into AMWA by reading up on the national website. From then on, I felt like I had to join!

What has been your biggest success to date involving AMWA?

I think our most successful event was the recent Miss Representation screening. We often have lunchtime talks, so it was nice to get a group together to watch a well-made documentary. Afterward, we had a really great discussion and it made me so proud and happy to observe everyone contributing. One girl mentioned that she didn’t really consider herself a feminist but was surprised by how much she identified with the film.

What is one thing you would love to see AMWA accomplish?

I would love to see AMWA enthrall and captivate more men! We still get a lot of guys scoffing at us or worse—feeling like they aren’t welcome at our events. I’d love to see that change.

What has been the biggest challenge involving your experiences with AMWA?

I am really hard on myself. When I don’t accomplish something I set out to do, I always think it was absolutely my fault. So I think my biggest challenge was trying to relax a bit more and not worry about everything.

Who serves as your number one role model/greatest female inspiration?

Forgive me for being cheesy, but I would definitely say my mom. She grew up in a really tough environment and moved to the U.S. when she was 15. She learned English quickly and went to college at 17! She also raised me and my sister as a single mom for a while. She always stressed that we be independent. She is immensely sassy, smart, and an incredible mother.

Did you take time off in between college and medical school?

No, I went straight into medical school. In retrospect, a little time off probably would’ve given me some interesting life experiences but I know those will come with time!

Words to live by?

“There is light in darkness, you just have to find it.” –Bell Hooks

What is your favorite self-indulgence?

Lying in bed and watching terrible tv. Lately, my boyfriend and I have become obsessed with The Voice.

What are your hobbies outside of AMWA and Jefferson?

I love to sing. I used to do some musical theater and a bit of opera. I also like to write, listen to lots of music, draw and paint, go on hikes, cook, and go thrift shopping.

If you could sit down with one woman who would you choose and why?

I would have loved to sit down with Golda Meir, prime minister of Israel in the 1970s. I would love to hear about how she remained so strong and tough in the most tumultuous of times and how she kept her goal of peace at the forefront throughout her career. She dedicated her entire life to public service, so I would have loved the opportunity to hear her stories, ask her about how she balanced family life and work, and asked her about how to proceed despite opposition and obstacles.
More about Victoria Greenberg
Vicki Greenberg is a third year medical student at Jefferson Medical College in Philadelphia, where she is also pursuing a public health certification. During her first year of medical school, she joined AMWA as a member of the board of directors and became co-president her second year. In addition to AMWA, she also holds leadership positions in the OB/GYN Society, Internal Medicine Society, and FUNCTIONAL, a group that educates fellow students about healthcare reform and insurance issues. The advancement of women leaders is an incredibly important issue to Vicki. Her passion for women’s rights extends into her research. She is working with a physician on a post-partum depression research study and a second study on female sexual dysfunction. She entrenched herself in community health and volunteerism in college, when she helped the American Red Cross run blood drives at her alma mater, the University of Maryland. She has been immensely honored and excited to serve as co-president in 2011-2012, during the 50th anniversary of women attending Jefferson Medical College. In the past year, she served on the 50th Anniversary Steering Committee and helped plan and organize a series of events, including an auction and weekend symposium in October. Vicki is humbled and excited to serve as the Region 3 Director! She is looking forward to interacting with talented and passionate young women from different schools.

What ideas do you have for advancing women in medicine?  We are interested in hearing your thoughts.  Please contribute with your ideas and commentary here or on our other social networks @AMWADoctors on Twitter, American Medical Women’s Association on Facebook, LinkedIn, or with associatedirector@amwa-doc.org.

Founded nearly a century ago, the American Medical Women’s Association is an organization of women physicians, medical students and other persons dedicated to serving as the unique voice for women’s health and the advancement of women in medicine.  This is achieved by providing and developing leadership, advocacy, education, expertise, mentoring, and through building strategic alliances.  The association functions at the local, national, and international level to advance women in medicine and improve women’s health and is an active participant in setting national health care policy and influencing legislation on women’s health issues.   Become a member now!

The American Medical Women's Association is an organization which functions at the local, national, and international level to advance women in medicine and improve women's health. We achieve this by providing and developing leadership, advocacy, education, expertise, mentoring, and strategic alliances.