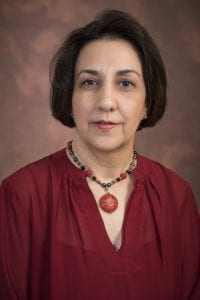 NEELUM T. AGGARWAL, MD, is a cognitive neurologist, clinical trialist and researcher in the field of population health and aging. She is the Senior Neurologist for the federally funded Rush Alzheimer’s Disease Center Clinical Core in Chicago; Director of Research at the Rush Heart Center for Women, and an Associate Professor in the Departments of Neurological Sciences and Rush Alzheimer’s Disease Center at Rush University Medical Center.

Dr. Aggarwal is a long standing Steering Committee member and Site Principal Investigator for multiple NIA funded clinical trials on aging and Alzheimer’ s Disease through the Alzheimer’s Disease Cooperative Study Group (ADCS) – and Alzheimer’s Therapeutic Research Institute (ATRI). She is the Site Principal Investigator for clinical trials that are accelerating the research in Alzheimer’s disease prevention while also supporting RADC focused activities that increase interest and enrollment in trials and other collaborative endeavors to advance prevention research in ethnically diverse patient populations. She presently conducts trials involving investigational anti amyloid treatments in cognitively unimpaired persons, who based on their age, have elevated biomarker evidence of amyloid or genetic background, that may place them at risk for developing .Alzheimer’s Disease dementia,

Her clinical, field and population health research has focused on the predictors and outcomes of cognitive decline, mild cognitive impairment and dementia in older adults, with a focus on underserved populations in Chicago. She is particularly interested in identifying how social determinants of health, cardiovascular disease and other novel risk factors for cognitive impairment including sex and gender differences, may lead to strategies to prevent cognitive decline and dementia.

A graduate of the Academy of Neurology – Palatucci Advocacy Leadership Forum, Dr. Aggarwal is a long-standing voice for community based research, clinical trial participation, public health initiatives, locally and nationally. She has served in numerous leadership roles throughout her career. She is the Chief Diversity and Inclusion Officer for the American Medical Women’s Association (AMWA), AMWA-Liaison to the Governing Council of the American Medical Association- Women’s Physician Section, a Fellow of the Institute of Medicine Chicago, Founding member of the Women Against Alzheimer’s Disease network, and was recently was awarded the 2016 Woman in Science award from the American Medical Women’s Association .

She completed her medical degree from the Rosalind Franklin University – Chicago Medical School, completed her neurology residency at Henry Ford Hospital in Detroit, Michigan, and completed an aging and neurodegenerative disorders fellowship at the Rush Alzheimer’s Disease Center.