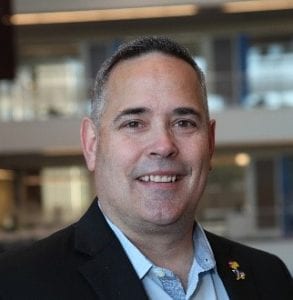 Steve Leonard joined the KU School of Business as the Director of the graduate program in Business and Organizational Leadership following a 28-year career in the U.S. Army. He is a former senior military strategist and a career writer and speaker with a passion for developing and mentoring the next generation of thinking leaders. He is a non-resident fellow at the Modern War Institute at West Point, the co-founder of Divergent Options, a founding member of the Military Writers Guild, and a frequent contributor to the Atlantic Council’s Art of Future Warfare Project. Published extensively, his writing focuses on issues of foreign policy, national security, strategy and planning, leadership and leader development, and, occasionally, fiction. An alumnus of the School of Advanced Military Studies, he led the interagency team that authored the U.S. Army’s first stability operations doctrine, spearheaded the reintroduction of operational art into capstone doctrine, and wrote the guiding principles for the Army Design Methodology. He is the author of four books, numerous professional articles, countless blog posts, and is a prolific military cartoonist. Follow his writing on his personal blog, The Pendulum, and on Twitter at @Doctrine_Man.