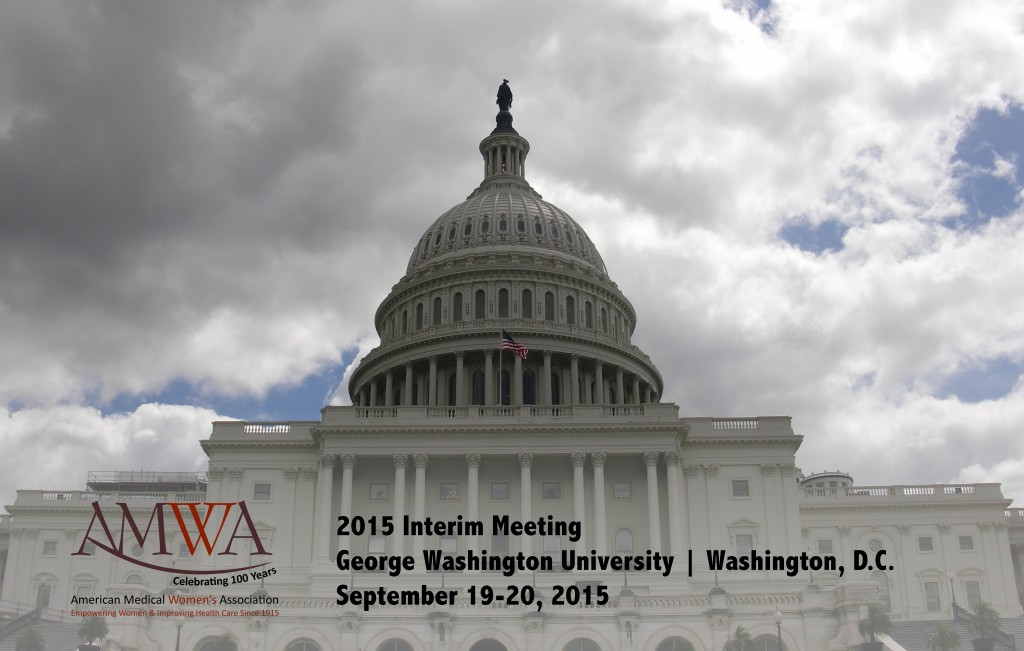 The AMWA Centennial Interim Meeting brought together over 75 physicians, residents, and students for a weekend of networking and strategic planning. Highlights of the meeting included the Women in Medicine Reception with inspiring keynote presentations by Dr. Jan Orlowski, Chief Health Officer of the Association of American Medical Colleges, and Dr. Alice Chen, Executive Director of Doctors for America. The evening concluded with a screening of Someone You Love: The HPV Epidemic and a special appearance by Tamika Felder, one of the cervical cancer survivors portrayed in the movie. A short commentary by Dr. Shobha Krishnan, president of the Global Initiative Against HPV and Cervical Cancer, sounded a call to action for increased education on cervical cancer prevention and screening. Special thanks to our generous hosts, the AMWA Branch at George Washington University School of Medicine and Health Sciences. View photos from the event here.

AMWA’s strategic planning session identified several key areas for AMWA to grow and expand over the next few years, including women’s health and women’s leadership. We encourage members to get involved in one of our many initiatives locally and nationally. Please e-mail associatedirector@amwa-doc.org regarding your interest.

Someone You Love:  The HPV Epidemic with post movie commentary by Dr. Shobha Krishnan, President of the Global Initiative Against HPV and Cervical Cancer

Dr. Janis M. Orlowski graduated from Marquette University’s College of Engineering with a Bachelor of Science degree in biomedical engineering in 1978. She received her medical degree from the Medical College of Wisconsin in 1982. Her residency (1982–1985), her term as Chief Resident (1985–1986) and her Fellowship in Nephrology (1986–1988) were completed at Rush University Medical Center, Chicago. In November 2013, Dr. Orlowski joined the Association of American Medical Colleges as Senior Director, Clinical Transformation Unit, Health Care Affairs. In November 2014, Dr. Orlowski was named the Chief Health Care Officer. She was the chief operating officer and chief medical officer of MedStar Washington Hospital Center, Washington, D.C., the largest hospital of the MedStar Health system. She oversaw the medical staff, clinical care, quality, patient safety, medical risk, perioperative services, ambulatory care and the medical education programs from 2004 to 2013. She began her career at Rush as an intern. She left Rush as associate vice president and executive dean of the Rush University Medical School in Chicago. She is board certified in both Internal Medicine and Nephrology. In her practice, she specializes in acute renal care and transplantation. She has been honored with teaching excellence awards, has participated in education and research in renal transplantation and has served on several national committees to oversee the quality of care in transplantation. Most recently, Dr. Orlowski chaired the national committee at UNOS (United Network for Organ Sharing) on transplant policy. She has been the president of the Chicago Medical Society, and board member and chair of the Illinois State Medical Society. She served as editor of Disease-A-Month, and was on the editorial board of Nephrology. In 2007 Dr. Orlowski was inducted as a Master in the American College of Physicians (ACP). Dr. Orlowski currently serves as chair of D.C. Board of Medicine, vice chair of the Board of Catholic Charities of Washington, Board of Trustees of Marquette University, Board of Montini Catholic High School and was recently appointed to the Board of Trustees of the Medical College of Wisconsin.

Alice Chen, MD is a practicing internal medicine physician and the Executive Director of Doctors for America – a national organization that mobilizes doctors and medical students in all 50 states to be leaders in putting patients over politics on the pressing issues of the day to improve the health of patients, communities, and nation. She is an Adjunct Assistant Clinical Professor at the David Geffen School of Medicine at UCLA. She received her undergraduate degree from Yale University and her MD from Cornell Medical College. She completed her internal medicine residency at UCLA. During medical school, she volunteered as a caseworker for the American Red Cross and assisted the director of the largest service center in Lower Manhattan for 6 months after 9/11. She was also the co-director of Big Buddies, a program based on the Big Brothers Big Sisters program in which Cornell medical students mentored underserved youth. At UCLA, she served as the co-director of the Resident Elective in Malawi, Africa for the UCLA Department of Medicine and Program in Global Health from 2008-2010. She has been a leader in Doctors for America since its inception in 2009 and served on the board and as vice president before becoming the Executive Director in 2011. She has spoken about physician advocacy and health reform all over the country and in national media outlets. She is originally from the San Francisco Bay Area.

Movie Screening – Someone You Love:  The HPV Epidemic

Learn more about the movie here.